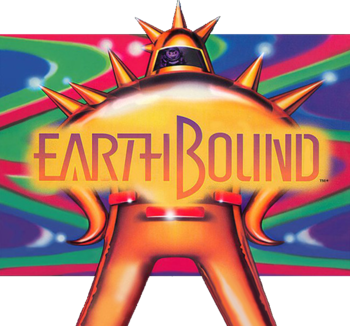 This game stinks!
"Listen Ness. I'm going to tell you something very important. You may want to take notes. Ready? ......You're the chosen one."
— Talking Rock

EarthBound, originally released in Japan in 1994, is a twist on the standard RPG setting for the SNES that follows the story of Ness, a seemingly normal boy who lives in Eagleland. Late one night, a meteorite landing outside town awakens Ness. The meteorite brings with it a bee (or not) from the future, who tells Ness of its devastation at the hands of an indestructible being called Giygas— a being Ness is destined to defeat. Ness's journey to stop Giygas will take him through time and space to meet the remainder of the Chosen Four (Paula, Jeff, and Poo) and collect the Eight Melodies for his Sound Stone to unite the power of Earth as his own.

EarthBound is the second of a trilogy of Japanese role playing games known as Mother, an experiment in storytelling in a different medium by Japanese celebrity essayist and copywriter Shigesato Itoi. Mother 2: Gyiyg no Gyakushū (translated: Mother 2: Gyiyg Strikes Back) serves as a loose sequel to Mother, since the two games share the same essential setting (an affectionate homage to idealized America), as well as the same base mechanics.

Gameplay has changed somewhat from the first game. For starters, party count has been upped from three to four characters, and the ability to pick and choose who joins you has been cut, with each party member joining in a linear order. That being said, all four characters have their own strengths and weaknesses: Ness is a tank that uses support spells to help his friends, Paula is a devastating Black Mage and Glass Cannon, Jeff is a Mechanically Unusual Fighter who lacks PSI but can help out by making extremely strong mechanical inventions using Joke Items, and Poo is a well-rounded Magic Knight with a varied, but largely redundant, array of PSI moves and a couple other tricks up his sleeve, too. This game also introduces the "rolling counter" system for battles, wherein using a PSI move or being hit causes your PP and HP meters respectively to begin rolling down rather than dropping immediately. This allows characters to survive fatal hits if they can be healed or if the battle ends before hitting zero, turning the game into a pseudo-real-time RPG.

Of the three games in the Mother series, only EarthBound ever received a physical release in North America, coming out in 1995. It was a critical and commercial disaster in America, but in the years since it's become very much Vindicated by History and is now considered one of the greatest games ever made. Nintendo eventually digitally released the unproduced localization of the first game, Mother for the Virtual Console, under the title EarthBound Beginnings. To date, Mother 3, originally released in Japan for the Game Boy Advance (after a planned N64 release was scrapped due to requiring a N64 add-on drive that too was never released), is not currently planned for an official North American localization, although in certain places on the Internet you can find a fan-translated version.

After nearly 20 years of unavailability outside secondhand markets, on July 19, 2013, Nintendo finally re-released the game via the Wii U Virtual Console, initially relegated only to Japan but later released overseas due to high fan demand (and at the far-lower-than-eBay-auctions price point of $9.99); the game's international Virtual Console release not only covered North America, but also Europe, marking the first time the latter region officially got their hands on EarthBound. To round out the package, it also digitized the original Player's Guide

that it bundled with the SNES release and offered it up for free (so that players could read the guide in a browser, including using the Wii U's browser on the GamePad). Nintendo also re-released the game on the New Nintendo 3DS and the New Nintendo 3DS XL handheld systems as a part of their Super Nintendo Virtual Console in early March 2016 note this excludes the original Nintendo 3DS, Nintendo 3DS XL and Nintendo 2DS. It was also included on the Super NES Classic Edition in 2017.

As a side note: Ness and Lucas (the protagonist of Mother 3) are probably best known to Western audiences via their appearances in the Super Smash Bros. games.note Until this game's release on the Virtual Console, Ness was only known this way outside Japan and North America.

Because of the number of tropes associated with EarthBound, we've split them up into separate pages: