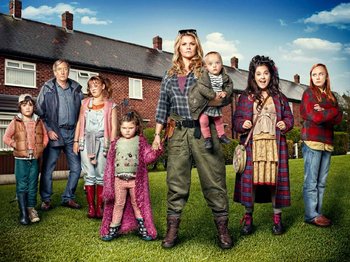 "Raised By Wolves" (2013-2016) is a British comedy series from writer Caitlin Moran and her sister Caroline Moran, focusing on a large and eccentric homeschooled family from Wolverhampton in the British Midlands, led by single mother Della. It is based on the experiences of the two Moran sisters, with the character of Germaine acting as an Expy for Caitlin and Aretha standing in for Caroline.

Following the broadcast of a pilot episode in late 2013, two series aired on Britain's Channel 4 between 2015 and 2016, and were praised for their sympathetic depiction of working-class British women.

Though it was reportedly Channel 4's second highest rating program of 2015 and won the prestigious Rose d'Or for Best Sitcom in 2016, the network revealed in August 2016 that they did not plan to renew the show.

The Moran sisters subsequently mounted a crowdfunding campaign to produce a final episode or series to tie up loose ends, which was not successful in meeting its goal. In December 2016, Caitlin Moran described the show as 'tragically axed'

, suggesting that no further efforts will be made to turn it into an Uncancelled series.

An American adaptation to be written by Diablo Cody had already been announced at the time of the British version's cancellation, and is expected to appear on ABC.

For the unrelated science fiction series on HBO Max, see Raised by Wolves (2020).