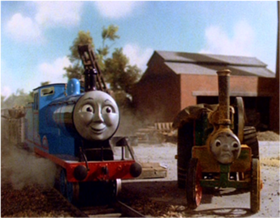 All the engines on the Fat Controller's railway work very hard, but they're happy to be kept busy and are very proud when they're called "really useful". One day, Edward tells Thomas that he's going to the scrapyard and Thomas cheekily tells him that he's not that old, but Edward knows that Thomas is only teasing.

At the scrapyard, there are a lot of rusty old pieces of cars and machinery which are to be broken down and Edward takes them to the steelworks, where the pieces are melted down so they can be used again. When Edward arrives, he sees a very unusual sight - a traction engine. Edward is surprised, as the engine isn't broken down or rusty. Edward greets the traction engine and asks why he's in the scrapyard. The traction engine introduces himself as Trevor and tells Edward that he's due to be broken up the next week. Edward is very upset to hear this news, as Trevor is still clearly in perfect working condition, only missing some paint, polish and oil. Trevor tells Edward his master decided that he's old-fashioned and Edward responds that others tell him the same thing, but knows that he's actually really useful.

Edward then asks Trevor what work he did and Trevor tells him about his old life - he would travel from farm to farm doing various jobs such as hauling logs and threshing corn. Most especially, he remembers how children would be excited to see him and he would give them rides. Trevor is really fond of children. Edward leaves the scrapyard upset that Trevor's going to be broken up for no reason and travels to the station thinking of a way to save him. He thinks of many people who love engines, but not anyone who would have any room for a traction engine.

Entering Wellsworth, Edward sees the Church Vicar and believes he could be the perfect person to save Trevor. The Vicar notices that Edward seems upset about something and the driver tells him about Trevor's issue. Edward pleads the Vicar to save Trevor and the Vicar promises to take a look at Trevor.

On Saturday, Trevor's driver, Jem Cole, tells Trevor that the Vicar is coming to look him over and maybe buy him. Both are excited and Trevor is cleaned up and oiled. He now has shining green paint and golden brass, making him look the best. The Vicar and his two sons arrive and Trevor starts chuffing around the yard, happier than he ever was. Afterwards, the Vicar talks to the Scrapyard Owner and is able to buy Trevor cheap. Jem Cole tells Trevor that he has been saved from scrap and will now reside at the vicarage.

Trevor lives at the vicarage orchard, which is next to the main line. As a result, he and Edward see each other everyday. Trevor enjoys his new work, but his favorite day of the year is the day of the church fête - he would have a wooden seat coupled to him and gives children rides there. Afterwards, he will be seen lying asleep thinking about the the wonderful time he had with the children he met.