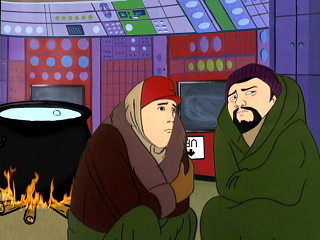 You get in that pot.

Quinn and Stormy get a distress call from Ice Station Zebra in Antarctica, in which one crew member begs for them to save him, since the other crew member, Todd, is trying to eat him. Todd claims that the first one is just suffering from Seasonal Affective Disorder, and Quinn and Stormy decide to come over there anyway.

Quinn, Stormy, and Debbie head for Antarctica, with a weird German that came with the sub. As they try to surface, Todd keeps trying to get his victim in the pot, saying he's been waiting for food for a month and can't want any longer.

The submarine ends up crashing into the ice surrounding Ice Station Zebra, breaking it off from the mainland and damaging the sub's propulsion drive. To make matters worse, Ice Station Zebra capsized. Stormy fixes the sub (despite Quinn's claim he couldn't) and himself a sandwich.

The Stinger: Debbie, Quinn, the German, and two random sailors sing "It's a Long Way to Tipperary".