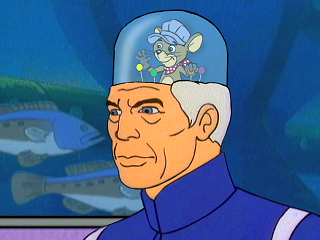 The last episode to have Harry Goz as Captain Murphy before his death.

Murphy has photographic evidence that Quinn's been cheating on Debbie with "Chubby" Carol, and uses the chance to blackmail him into doing something for him. Quinn agrees, but he's getting drunk first.

The next day, Stormy and Marco are teasing Debbie about Carol (her not getting why) when Murphy appears randomly asking for cheese. It's actually a mouse steering Murphy's body like a robot, and the rest of the crew go to investigate.

Murphy's demand was that Quinn make him into a robot. Quinn tries to offer the hands of Franz Joseph Haydn to Murphy, but Murphy destroys them and demands chainsaw hands. The crew find out that Murphy's brain has been put in a robot body, and while Debbie asks if Quinn's lost it, Stormy wants in on the robot body too. It also turns out that the robot body was funded by Sparks, who is now sharing Murphy's robot body. As they argue over what to call themselves (Barbeaubot or Sparkimus Prime), Quinn tells Debbie and Marco that he's too drunk to put them back in their bodies, and Stormy saws his head open to be prepared for a robot body.

Marco decides to destroy Sealab to get rid of Quinn's creations. Sparks tries to stop him, but Murphy refuses to move until Sparks agrees that they're the Barbeaubot. Quinn decides to stay and die with his creations, and Debbie refuses to leave without Quinn while Marco refuses to stay with the freak science creature. Quinn reminds everyone that he's a freak science creature too, in a call back to the first episode where he reveals himself to be a cyborg.

Quinn claims that everything, including the event that led to this episode, seemed like good ideas at the time. Sparks makes another crack about Carol, and Debbie demands to know what the deal is with Carol. Marco decides he wants a robot body too, with an hydraulic penis like Quinn's-no, two! Quinn tries to get out of it, but when Marco blackmails him too, he declares that everyone gets a robot body and grabs Stormy's brain.

As the human bodies are off to one side, everyone complains about their new robot bodies. Marco got made into an alligator like he wanted, but he didn't get the two hydraulic penises. One of Debbie's arms ends in a fondue pot and her breast missiles are smaller than Murphy/Sparks's. And Stormy is just his brain attached to robot feet, an intercom, and a wig.

They try to demand their human bodies back but Quinn laughs and tells them that more mice have come to claim their bodies already, and that Quinn's perfected the technology needed to hide that they're in there, modifying Mouse!Murphy in the process. Mouse!Murphy orders the robots (barring Quinn) to go away, and the robots decide to find a place where freakbots like them can live in peace.

The Stinger: The mouse crew all wake up with no memory of having mice in their bodies, thinking it was all a dream and having an unexplained craving for cheese.

The Other Stinger: The freakbots try to buy a car.