Recap / Another Eden Arc I The Cat Beyond Time And Space 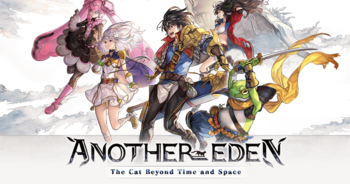 "Well, I guess...
It's time to set out on a journey
across time and space
to save our lost future.
Before the darkness of time falls upon us all..."
The Cat Beyond Time And Space is the first story arc in Another Eden, and introduces main characters Aldo, Feinne, Riica, Amy, Cyrus, and Helena.

It follows the adventures of an adoptive young man named Aldo, who's town is attacked and sister kidnapped by the Beastfolk. While trying to rescue her, a portal sucks him up and drops him into the very distance future, which then vanishes and is replaced by a desolate world. Guided by the words of a mysterious Phantom, he now journeys through time and space to save all of existence, before the darkness of time falls upon them all.

The story opens up on an angered Beastman walking through the forest, expressing his hate for humans for their arrogance. He then hears a mysterious sound, he follows it, discovering a baby in a basket along with realizing that the baby possessing a mysterious power. Upon hearing someone coming, leaves, but vows to meet again. A man, the mayor of Baruoki, then walks into the scene, and discovers a young boy hiding in the bushes alongside the baby, and realizing they have no parents, adopts them.

16 years latter, the baby, now grown up and named Feinne, walks up her big brother, Aldo, so not to be late with his meeting with Darnius. After-which, he and Feinne decide to do some chores around the village, along with getting the mayor a new cane as an anniversary gift for adopting them. After that, Aldo then goes to the hills at the edge of town to retrieve their pet cat Varuo. However, upon reaching him, a portal opens up in front of them, causing Varuo to go through it, with Aldo giving chase. On the other side of the portal, called "the Gallery of Dreams" by an old man called "Gallery Master." The Gallery Master then gives him the power to summon other adventures using the power of Chrono Stones, summoning one as a result.

Back outside, two beast folk, an armored beast named Vares, right hand to the second man, The Beast King, attack the town in search of Feinne for use of her powers. When Aldo returns home, he finds the mayor wounded on the floor, telling him what happened. Chasing the Beast King to the outskirts of Baruoki, he faces the Beast King in combat, but falls to do much to him. Just then, Aldo's sword, known to the Beast King as "Ogre Rancorem," suddenly comes alive and asks Aldo to use him, which he agrees to. Despite the power of Another Force though, it only forces the King to curb-stomp him, knocking Aldo unconscious. After waking up, Aldo learns that Ogre Rancorem is back to normal and sealed away, and a girl from his village tells him that the Beastfolk took Feinne to the Moonlight Forest, forcing him to make pursuit.

Chapter 2: Pursuit: The One Waiting in Moonlight Forest

Making his way through Moonlight Forest, Aldo encounters Vares, who tells him that the Beast King has taken Feinne somewhere Aldo won't be able to find. Vares then transforms into "Beast Vares" and does battle with Aldo, which ends in Aldo's victory. He then forces Vares to admit where Beast King and Feinne were, "Beast King's Castle," and claims they seek to make Feinne their "savior." Vares then summons Chimeras to kill Aldo himself as he makes his getaway. Cornered, a strange blue portal opens up behind him, sucking him up. He is then dropped off in an airport onto of the clouds, much to his confusion, as a girl from behind accuses him of being a "synth-human". When Aldo expresses him confusion over what a synth-human is, she explains that they are outside "Elizon, The Shining City." More conversation with the girl has Aldo learn that the year is 1100 AD, 800 years into the future. As Aldo tries to process it, the girl, now believing that he isn't a synth-human, decides not to get involved with him and heads back to Elizon, while also revealing her name to be Amy.

Chapter 3: Elzion: Echoes in the Skies

As Aldo makes his across Elzion Airport, he runs into the synth-humans mentioned by Amy, surrounding an android girl named Riica. After helping her fight off the synth-humans, Riica decides to follow Aldo in order to help him get back home. After reaching Elzion, he finds his way to the weapon shop called Ishar's, where he reunites with Amy, where her father, Za'ol, while fixing his Ogre Rancorem sword, confirms that Aldo is indeed from the past, much to her shock. Putting it aside, Amy reveals that intel on a synth-human commander named Galliard is holed up in the Industrial Ruins, and intends to go in to investigate it by herself. Za'ol, wanting her daughter to be safe, has Aldo accompany her. Soon after leaving the shop, they run into Amy friend, Sebastia, who tells Amy that they need to talk at her place.

Meeting in Sebastia's home, she reveals that she found a recording device called a "Sound Orb" from a Synth Solider that had a recoding of Amy's dead mother singing. When asked for where she found it, Sebastia states it was at the Elzion Airport. While going there to investigate, Amy reveals that 10 years ago, her mom took them to the airport to celebrate her birthday, only to be caught up in the Synth Human Rebellion, and then sacrificed herself to keep Amy safe. Just then, from behind, an armored robot with a cape reveals himself to be "Galliard," the leader of the synth-human army. Galliard states the he seeks the Sound Orb as a souvenir, due to the army having an interest in the knickknacks humans make. He then states that there is another Sound Orb on Route 99, before disappearing.

Despite suspecting it to be a trap, they go to Route 99 anyway, and confront Galliard again, who plays the orb, revealing that the two orbs were meant to be gifts from Amy's mom for both Amy and Za'ol. Galliard states that the reason why synth-human are attracted to souvenirs is because they envy a human's memories, compared to them, who just have easily replaceable data. Not wishing to give up the orb, they fight, only for the heroes to learn that "Galliard" is a fake, a massed-produced Synth Solider. The fake admits that the souvenirs may be an illusion to them, but are still fulfilling nonetheless, before breaking down. Back at Sebastia's home, she fixes the Sound Orbs before playing them together, which is in fact her mother's birthday gift to her. After that, Amy vows to change the world for the better, while Sebastia opens the way into the Industrial Ruins for them to confront the real Galliard.

Chapter 4: Roar in the Ruins: Rise of the Synth Humans

With the way into the Industrial Ruins now open, Aldo and friends journey into the depths of the ruins, where they catch and try to spy on the real Galliard, talking to another synth-human named Helena. Galliard speaks of a "timequake" predicted by "Professor Chronos", stating that the spacetime is stretched thin, and the world doesn't have long. Helena tries to have him reconsider negotiations with humanity, but shoots it down, before calling out to Aldo and company. Spotted, Amy tells Aldo and Riica to escape on board a hover platform with her, but despite its speed, Galliard catches up to them in his motorcycle, and does battle with them. Despite his best efforts, Galliard is defeated and fatally wounded as a result. Dying, Galliard warns them that the Xeno Prisma Elzion uses in their day-to-day life with cause a massive timequake that threatens the world, before asking Helena for forgiveness and passing on. The party, still weak from their fight with him, spares Helena and somberly leaves the ruins.

Chapter 5: You're Gone? Our Lost Future

Returning to Ishar's, they give Za'ol the good news and he decides to celebrate in the town square. Just then, the sky turns dark as one by one, the people of Elzion, followed by Elzion itself, disappear. Afterwards, Aldo finds himself standing on top of the ruins of a desolate world. Wondering what just happen, a mysterious voice states that history has been rewritten. A entity in blue fire called the Phantom appears before Aldo, and explains to him that the past has changed the future, and Elzion has been erased due to its potential being cut short. He then opens a portal through time, and asks Aldo if he wishes to save Elzion and everyone in it, at the risk of countless worlds being destroyed. Aldo just asks him how to save everyone, and the Phantom explains that the only way to fix it is to go far into the past, before disappearing. As Aldo jumps into the portal, a flashback to when Fienne and Aldo were kids is shown. There, while trying to find Plum Mushroom, she meets a beastfolk girl named Altena, who she befriends after she heals her leg injury.

The scene then shifts back to Aldo, hurtling back in time to Antiquity on the Zol Plains, where he finds that Riica has not only survived the rewriting of the future, but followed him into the past. Just then, a T-Rex attacks them, but they successful in defeating it and defends a young boy from the danger. After that, the boy, Veron, asks them to speak later at Ratel Village. After Veron leaves, Aldo asks Riica why she didn't disappear along with the future, only that Riica herself admits that she doesn't know why either, and that besides some ghost data, she still functions just fine. Aldo also notices that that the repairs Za'ol did to have been undone, proof that Elzion has been erased, and vows to save them all.

Chapter 6: Salamander Encroached Upon from Another World

Making there way through Zol Plains, they reach Ratel Village and speak with Veron again, who tells them that he has some bad feelings about Nadara Volcano located outside of town, and thinks the best course of action is to directly ask the great Eidolon of Fire, Salamander, about it, but is too sacred to go himself. Aldo and Riica then decided to go to the volcano themselves to ask Salamander themselves. Traveling up Vasu Mountain, they reach the depths of the volcano, reaching Salamander, who Riica notes is being corrupted by something. After defeating Dark Salamander and returning him to normal, the Spirit thanks them, but warns what was corrupting him was merely a small portion of a sinister power. He then tells them to that a great disaster threatens all, and asks them head to Palsifal Palace, as he feels a great disturbance from it. Meeting up with Veron one last time, Aldo tells him what happened, and he suggests either making Acteul or Palsifal Palace their next stop.

Chapter 7: Acteul: A Figure on the Water

Chapter 8: Palsifal Palace: Heed the Wishes of the Oracle

Chapter 9: Fear the Man-eating Marsh: Lord of the Abyss

Chapter 10: Tower of Time: Peering into the Embryo's Dream

Chapter 15: Call from the Stars: Xeno-Domain

Chapter 19: Twilight of the World: The Shores' End

Chapter 21: Tower of Stars: Behind the Mask of the Oracle

Chapter 23: Storming the Dimensional Vortex! Echoes of the Phantom

Chapter 26: Friends: To Another End of Time