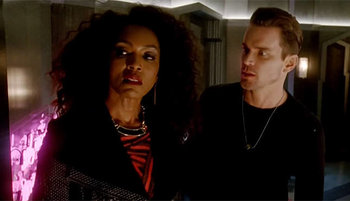 The Countess is reunited with her true love. Donovan and Ramona take another stab at revenge. A careless decision lands Alex in hot water.

Elizabeth narrates the changes in men and women as they age; men's hearts grow larger as women's grow smaller. She supposes that her own must be tiny. She readies herself before entering the sealed corridor that she now knows contained Rudy and Natacha for decades. She finds their train tickets from when she thought they had left without her or saying goodbye.

Will discusses how they should convert and decorate the lobby for their wedding. Elizabeth wants a small, intimate affair. Will wants a spectacle. She presses the point, and he accedes to her wishes. IF he designs her wedding dress, she'll do everything else. Elizabeth tells Liz to have the flowers delivered Wednesday morning. Liz balks, incensed Elizabeth would involve him in wedding tasks after she killed Tristan. She responds that Tristan didn't know how to love, and therefore could not have loved Liz. Liz insists that Elizabeth didn't know him at all, and walks away. Elizabeth narrates that those to whom she has given so much respond with ill wishes.

A news report of an exsanguinated man draws the notice of Elizabeth and Alex, as well as the mention of related murders involving children as witnesses. An investigator calls Elizabeth, telling her that he has found "her boy". She arrives at the door of a cheap motel room, and is invited in by Rudy with a kiss.

Back at the Cortez, Elizabeth and Donovan have sex. He wants a monogamous relationship, and she reluctantly agrees. She reminds him that while she's getting married on Wednesday, she should be a widow by Thursday. They resolve to make a hit list of people to clear from their upcoming life together.

Stormcock, party of three, arrives for their reservation. The unfazed Iris confirms the pornographer's reservation, and the trio (director / cameraman, a male and a female performer) prepare for their shoot. Iris narrates that that she doesn't mind pornography when done right. She also muses that now that she's turned she doesn't want it in her hotel anymore. Donovan happens upon the room where Iris has killed the pornographers and is stockpiling the harvested blood. He is elated, and says she's really changed. She says she has, and for the better, but that it's not safe for him there. Iris relates Elizabeth's confrontation of her about Bartholomew's release. Iris tells "the Countess" that it was Ramona Royale, but does not mention that she and Donovan are affiliated.

Will dresses Lachlan for the wedding. The son is still surprised that his father is marrying a woman. Will explains that he is bisexual, and equally attracted to men and women. He cautions that people don't understand bisexuality and conflate it with other things, but that he hopes Lachlan will find someone who truly understands him. He insists that "the Countess" is the one for him. Hazel materializes and offers Will a choice of weapons for his suicide that will be more merciful than the death Elizabeth has planned for him. The enraged Will says that he has a prenuptial agreement to protect him from his fiancee "bleeding him dry". Hazel explains that she was supposed to be married to March, but that Elizabeth intervened and married him instead. Will sends her away, saying that he never wants to see her again. She retorts that she will relish cleaning his formal wear once he's dead.

Elizabeth assigns a contractor to place an impenetrable security door on the recently unsealed corridor, ostensibly because she intends to store Will's collection there. He balks at the lack of owner's approval and the same-day time frame, but March appears and distracts him. She is infuriated that March imprisoned Rudy and Natacha, and vows that she never wants to see him again. He pleas that their dinners together are his sole comfort, and she responds that she wants the chamber completed by morning.

Donovan arrives with a human gift for Ramona. She is angry at his weakness. He tells her that he has an "in" again, now that Elizabeth took him back. He tells the re-interested Ramona that they must strike while Elizabeth is distracted by the wedding. As they dialysize the man Donovan brought, Ramona explains that she returned to visit her parents in 1992 after Elizabeth spurned her. Both parents became ill within months, and her father deteriorated mentally after her mother died. Their house was burgled one night, and Ramona returned home to find him beaten and near death. She fed him her blood, in hopes it would cure his Alzheimer's disease; it did not, and he did not have the capacity to understand his new condition. After twenty years, she found he had killed two intruders. After drugging him, she drowned him in the bathtub.

She muses that in the intervening years, her movies have become more popular again due to the Internet and she's being recognized on the street. She has realized all that Elizabeth took from her while they were together, and now she wants revenge. The two toast to revenge.

Alex observes a pizza delivery driver's arrival at Max Ellison's house. Inside she confronts the pack of children who were Max's classmates and an assortment of corpses. Now that there are no classes and they have "eaten" all their parents, no one is looking for the newly turned. Some of the children feel sick, and Max defiantly tells them that they need to drink blood to feel better. Some of the children, including Madeleine, do not want to continue killing. Jimmy, one of the children, suggests eating the sick children. Alex suggests that they can find refuge at the Hotel, since the pizza delivery will tip the authorities to this address. Jimmy reminds Max that it is their rule not to leave living witnesses, but Max declares that as his maker Alex is an exception. They abandon her to deal with the cops and corpses.

Donovan lets Ramona in to kill the drugged Elizabeth. Instead, Elizabeth is fully conscious, and Donovan uses the distraction to use a taser on Ramona. He carries her to the dungeon and straps her inside a neon cage sculpture. Iris is unclear what part of the plan this is, and he says that they are collection "their enemies" to watch by camera from afar. Iris comes to realize that her son has fallen for Elizabeth again, and has double crossed them again. Iris lectures about how Elizabeth will move on again to the next one, and Ramona awakens and concurs.

Rudy and Elizabeth meet in the seedy hotel again. Natacha has run off with the credit card Elizabeth gave her and is fully embracing the modern world. Rudy is lamenting the lack of enchantment in this era, and Elizabeth tells him that they can recapture the gilded age inside the Cortez with the money from Will. She alludes to "something happening" to Natacha. Natacha arrives and they discuss Beverly Hills shopping. Elizabeth invites Natacha to "girls' night" at the Cortez and assuages her concerns by telling her that March is long dead and can't hurt her. Elizabeth leaves, followed by a heartbroken Donovan.

In the Cortez's lobby, Liz objects at the nuptials of Elizabeth and Will. Elizabeth says to ignore her, as the State of California simply requires a witness. Once they are pronounced man and wife, Lachlan wants to go upstairs. Elizabeth will as well, so that she can change into traveling clothes. She hands off her bouquet to Liz, in the hopes that she will find true love, while Will goes to the bar for a drink. March introduces himself, and they share a drink. March laughs as Will muses on marrying Elizabeth. March commends how progressive "blended families" are, and Will says that Elizabeth loves Lachlan very much. March says that he wasn't referring to Will's son.

March guides Will upstairs to meet Bartholomew. Will rejects the eternal baby, and Elizabeth knocks him out for his hateful words. He awakes with Ramona in the dungeon and she guides him on how to release her. He pounds on walls and it is apparent that the dungeon has been moved to the sealed chamber. A frantic Will worries that they will starve, but Ramona tells him that she won't. She slices open his throat and feeds on him upon a gleeful merciless Hazel while Elizabeth watches via camera.