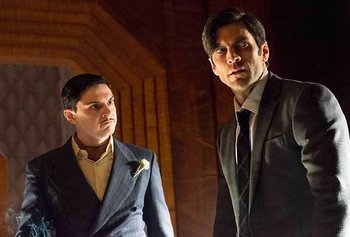 John closes in on the Ten Commandments Killer. Sally's arrangement with Mr March is revealed.

John watches Wren run into traffic before running (in vain) to her aid. He recalls seeing her in a glass coffin at the Hotel, and returns there to demand answers from Liz. Liz responds that she's full of lies, and John retorts that she died protect the Ten Commandments Killer. Liz's flippant response drives John to backing Liz into a wall, drawing a cool response.

Sally arrives and says that she will take him to get his answers. Liz gives them a gun "in case they find what they're looking for". Sally says there are answers inside Room 64. They enter and Sally describes that this was March's office, and that he died on a February 25 at 2:25am. She says he'll find what he's looking for behind the armoire. John enters the hidden door behind, finding trophies: hand of a thief (1926), teeth from migrant workers (who didn't observe the sabbath), Academy Award blogger Martin Gamboa's bashed-in brain, adulterer James Briggs' tongue and eyes, the twins' (who murdered their parents) hearts, the tongues and vocal cords of the tabloid journalists, the spleen of the televangelist. John is confused why there'd be a 90 year lull, and she explains that it took that long for March to find a successor. He quickly realizes that he himself is the new Ten Commandments Killer.

Hahn speaks to the medical examiner overseeing Wren's corpse, who explains that John escaped in all the confusion. Hahn says they should contact John's family and ensure they are alright. John stealthily enters, frieghtening Hahn. He says he is there to confess to the Ten Commandment Killer murders. He has regained his memories, and that he first visited the Hotel Cortez in 2010 for a night of drinks. There he encountered Liz, Sally, and Donovan for the first time. Donovan invites John upstairs for a party, which John initially rebuffs. He leads John to March's dinner with Elizabeth. March is enraged at the interruption, but intrigued about the homicides John investigated earlier in the night. Elizabeth introduces herself as "The Countess". March is so impressed by John that sends Elizabeth away to spend quality time with him. John comments on how out of place and time March seems, which March explains away as a discomfort with the modern world.

March goes on to muse about John's jet black aura, which he says signifies either cloaked identity or dogged determination. Over absinthe, John and March spoke for 2 days. Once John finally passes out, March discusses John's potential as a protege with Elizabeth. She agrees to abduct Holden to prepare John for his destiny with March.

When John returned home, Alex was unnerved by John's absence. Holden runs in to embrace his father, and John suggests they visit the Santa Monica carnival, leading to Holden's subsequent retrieval by Elizabeth.

John details the aftermath of Holden's disappearance, but that he is now aware of his frequent visits to the Hotel with March (and an ongoing sexual relationship with Sally). During one such visit, March suggests that John's pain is due to his lack of justice. March shows John his trophy room, including his accountant's head. Despite John's efforts to resist, he returned to visit again and mourn on Holden's 10th birthday in 2015. John is raging against the perversion of justice. March suggests a target: Martin Gamboa, who checked in and molested a 10 year old boy (and checked out that morning), leaving behind Polaroids of their sexual activity. Hahn interrupts to mention that Gamboa wasn't a pedophile, but John responds that Gamboa had other sins. Gamboa offered to sell his Oscar to John for $5000 (via Craigslist ad) until John presented the Polaroids. Gamboa denies it and tries to flee, but John beats him to death with the statue before trying to hang himself. March cut him down as Sally made no attempt to stop John's transition into a ghost like her, and March reminds her of their deal: protection from the Addiction Demon (a product of the ghosts) via a steady stream of victims, who will feed its need for souls that would otherwise consume the other ghosts of the hotel. (Hahn confirms at this point that Sally is Sally McKenna, who died decades before.) John wonders at his memory loss, and Sally responds that the Hotel supresses his memories. Sally and March help John cope through his murder of Gamboa, and March shows him the legacy of the 10 Commandments Killer which he wants John to finish. John appoints himself as lead investigator of the case with no knowledge that he is the actual killer.

John expounds that he actually has been to the Gamboa crime scene three times, and that he realized Hahn and Alex had been having an affair after a remark by Hahn. Sally explained to him that he couldn't directly link himself to the killings by killing his wife, as he wished to at the time, and provided a surrogate couple who adulter at the Cortez. March urges him also that the Cortez can not be linked to the crimes, so John set up the lovers electronically to stage their murder elsewhere (using police evidence and social media).

Hahn drapes the sheet over Wren's corpse, unwilling to believe that his partner is the killer. John says that Hahn is wrong, and stabs him with an autopsy tool with an admonition not to covet his neighbor's wife.

Returning the the Hotel (with a bloody paper bag), John encounters Iris, and tells her that he remembers his visits now to the Cortez over the last five years. She is relieved, as she was never sure whether he would and was always tempted to explain it all to him. He responds that once he was finally ready to understand that it all flooded back. He says that he regrets only Wren's death, but Iris responds that Sally's insistence that Wren watch out for John put the girl in harm's way.

Iris begs John to walk out and leave it all behind. He demands the key to Room 64. Inside, he and March place "the instrument of adultery" (Andy Hahn's severed penis and testicles) in the trophy case. John finally has clarity, and March is in awe of John's talent. John resolves to complete the masterpiece and March welcomes him home.