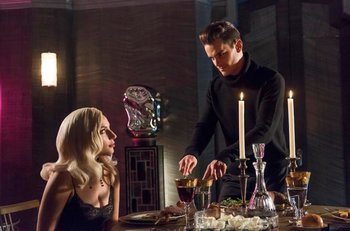 Liz escorts an elderly couple to their final room service, where they jointly shoot each other in the head. Liz thinks the result is beautiful, but Iris is annoyed at the amount of scrubbing required. Liz breaks into tears, still reminded of Tristan. She contemplates her own suicide, but is stopped by Iris with the reminder that her ghost will be stuck on premises if she has unfinished business. Liz always planned to make things right with her son. Iris reveals that she plans her own death, now that she doesn't have Donovan to live for. Together they make a suicide pact to be enacted once their affairs are in order.

Hazel brokers a vacation to the Cortez for Liz's son, whom she hasn't seen in 31 years. She cautions Liz to be cautious of how accepting the son will be. Liz presents a gift in exchange: oxygen infused laundry soap.

John attends a Santa Muerte service, where he stabs and slashes the leader and two attendants, collecting his ninth trophy.

Donovan invades Rudy's hotel room through the window, where he confronts the iconic actor. They spar over who can love Elizabeth better. Meanwhile, Natacha confronts Elizabeth during their tête-à-tête at the Hotel. Natacha draws a knife, Rudy draws a sword, and both of the modern lovers gun them down with shots to the head.

March (wearing his elaborate mask) holds his contractor captive, chiding him for not keeping to his schedule. John enters moments after March immolates the man alive. John asks March where to find Alex, and the two arrive for a more formal dinner set by Hazel. They discuss the fallout from Holden, and their decisions since rediscovering him. John is distressed that they have abandoned Scarlett, and Alex says that it is for the best that she leave Scarlett with him. She is dealing with the consequences from the the pack of afflicted schoolchildren, and Elizabeth will kill her and Holden if she doesn't fix the situation. John offers help.

Hazel gives Liz a head's up that her son is approaching the bar. Liz serves Douglas, who now works for a storage-unit company. As time wears on, they talk over Douglas' life and his lost dreams. Douglas, not knowing that he's addressing his parent, talks about his father's abandonment and their chance at reconnection. Liz offers to buy him another drink, but Douglas shies away with a "maybe next time".

John and Alex investigate the hideout house, where the corpses have disappeared but the blood remains. John seeks noises upstairs, and Alex finds Kimmy sick on the floor. Max comes upon Alex and slashes her before John fires a warning shot. Max is unintimidated as the pack has larger numbers, who begin to emerge from the next room. They warn that they told Alex not to come back. Kimmy begins gagging and despite Maddy's pleas is unable to save her with CPR.

Elizabeth interviews with the police about the disappearance of her newlywed husband, who enters and claims he's been exploring the new renovations. Once they are gone, he confronts her about his murder. She says it was due to his remarks about Bartholomew, and he claims that is just a pretext. He wants to know what to do about his legacy, and he cautions her that she can't just liquidate it, since she's not in his will. She reminds him that Lachlan has inherited it, and that she's his legal guardian until he reaches adulthood (if he ever does). She says she wouldn't kill Lachlan, but she would turn him. March materializes and says he advised her not to kill Drake on premises.

The pack arrives at the hotel, and Alex guides them to the lost hallway, and tries to usher them behind the sealed door. Reluctantly, they do and are sealed in. Inside they find Will's body and Ramona, who "smells appetizers".

John and Alex celebrate their victory with sex. She is wary afterwards, since they're supposed to be divorcing. He questions the need to divorce now that she's found Holden. She walks away, interested in "this new John Lowe". Sally materializes after she leaves and questions whether or not she is his "whore". He says that what he and Sally have is an addict's high. They begin to have sex, and he pushes her away. Sally wonders what Alex will do when she finds out that John is now a serial killer, or if Alex will accept him as Sally does. John says they have to try, for the sake of their two children, but Sally doubts his reasons and reminds him that she was there for him for five years. He walks away again and she says she deserves more. She comes at him with a switchblade, and he subdues her while she screams that he'll be back. The Addiction Demon flickers in and out of focus behind her.

Liz and Iris present an elated Hazel with a washer / dryer unit in gratitude for helping Liz with her son. As they leave, discussing how they plan their ultimate act, Hazel calls after telling Liz that Douglas awaits her in the bar. Douglas tells Liz that they are going to be following his dreams in Boulder, as Liz suggested. Liz is tongue tied trying to tell her son the truth, but Douglas has already derived it and knew from the beginning. Liz apologizes for having abandoned him, but he is well adjusted to it and has his wife for a sympathetic ear. Liz is still skeptical that he is not more unnerved at his father now being a woman, but Douglas responds that reality television prepared him and that there's "plenty of room for another woman in [his] life".

Elizabeth and Donovan discuss recent events, and Donovan laughs at her "hate watching" Will's death by Ramona without him. She responds that they can dump another body in soon for fun, but that he must retrieve Will's decaying body and place Ramona back in the neon iron maiden. He glibly says that while he's cleaning up her mess, she can clean up his. Elizabeth's eyes widen as he alludes to having killed Rudy. She finds the film icon's body and weeps over it.

An elated Liz breaks the news to Iris, who has prepared a tribute video and a selection of implements. Iris is upset at having been abandoned again, now by her best friend. Liz says that "women of a certain age" should be running the world, and are entitled to another chance. The bartender says the best is yet to come, and alludes to taking over the hotel.

Alex and John enter the game room, and Holden embraces his father. He tells his son it's time to go home, and the family walk to the doors. Sally confronts them, yelling that she's going to kill John.

Donovan dances in the penthouse, and Elizabeth is surprised he didn't run. Donovan responds that she would have found him. She says she couldn't find Rudy for a century, because he was trapped. Donovan says they are all trapped in this Hotel, and that while Rudy "made" Elizabeth, Elizabeth "made" Donovan in Rudy's image; he couldn't compete with her memory of Rudy, and so Rudy had to be eliminated at the first chance. Donovan knew that Elizabeth would come back to kill him, but he doesn't mind if dying is the only way Elizabeth will let him love her. She is charmed that he's willing to sacrifice everything for her. The tender moment is interrupted by an invading Liz and Iris, armed with the suicide arsenal, shooting at the couple.