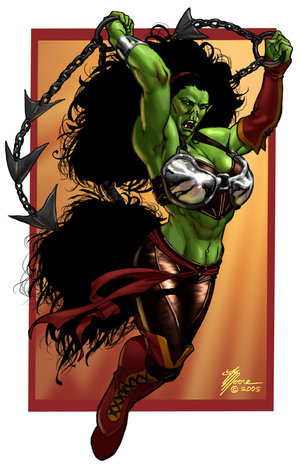 An Always Female character mixing the archetypes of Beast Man and Amazonian Beauty or Brawn Hilda. The Beastess is a female character who is big, strong, and intimidating, while showing primal or animalistic traits.

She is prone to Hulk Speak, and is often a Barbarian Heroine due to having lived isolated from civilization in some way—whether she is raised by wild animals or a member of a primitive tribe. Occasionally she is only a Beastess in appearance, which can vary from being heavy set, to athletic, to even having Boobs of Steel, but always imposing in size and strength. Despite her "savage" traits and appearance, a Beastess can actually be a very calm, even intelligent character.

Depending on how much of beast there is in a Beastess, she can sometimes overlap with Cute Monster Girl.