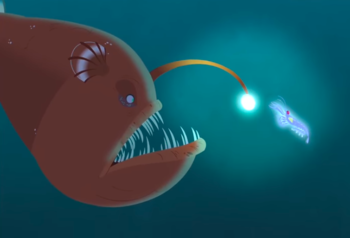 ...Good feeling's gone.
Deep-sea anglerfish are fishes well-known for their luminescent lures, used to attract prey amidst the ocean's dark depths. They, or creatures with similar lures on their head, are often used in media because of the surprise value: the lure seems nice and pretty at first, but turns out to be a trap set by a horrifying creature with More Teeth than the Osmond Family. (It also helps that Real Life deep-sea anglerfish are one of the more hideous-looking deep-water beasts.)
Advertisement:

Anglerfish are easily susceptible to an Animal Gender-Bender, as in real life the deep-sea varieties possess one of the most extreme cases of Bizarre Sexual Dimorphism: The image that most people think of is actually the female anglerfish; males of this sort have no lures, and are smaller than the females ... much smaller. At one point in history, scientists even believed them to be separate species. The male's life consists entirely of locating a female, then attaching itself to the female's body like a parasite, turning into a spare pair of gonads

so that the female can reproduce. Now you know.

Frogfishes, monkfishes, and sea toads are also anglerfishes, but they seldom appear in the media, as these species live in shallower waters and their lures don't glow in the dark, making them less visually-intriguing (they are considered just as ugly by most people though).

For Video Games, see also the Chest Monster, a creature that lures unsuspecting players through an attractive disguise of its own.

Sub-Trope of Fiendish Fish. Related to Bioluminescence Is Cool. Usually found in the Eldritch Ocean Abyss.