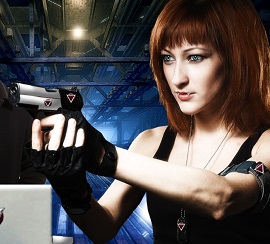 A Space Opera series by Penelope Irving, centred around the work of Earth’s space police force against a backdrop of three potentially warring Galactic ‘empires’ (although only one superpower is, technically, an empire).

An unspecified number of centuries in the future, Earth is at the centre of a Union of around 1200 inhabited worlds. But we are not of course alone in the Galaxy — on one side is the ancient Taysan Empire, Space Elves with a rigidly stratified caste-based society and an absolute monarch, and on the other, the totalitarian People’s Republic of Daros. A hundred years before the series began, the governments of each signed a three-way peace agreement that has just about held up since. But with each signatory thereby pledged to gang up on the other if any one breaks the accord, there’s widespread fear that the Peace is fragile at best.

‘Preserving the Peace’ against Taysan espionage and Darian infiltration is Spaceforce, the United Worlds of Earth’s crimefighters IN SPACE. The series follows the adventures of Jez, an experienced officer with a Dark and Troubled Past, and a new recruit, Andri Ferris, a Techno Wizard who came to the attention of Spaceforce when they arrested him for cybercrime. The pair work for ISIS, the branch of Spaceforce which deals with sensitive, political, intergalactic problems. Oh, and Jez is a space vampire.

On the Taysan side, there’s Jay, a charming and ruthless spy who got that way because he was a poor fit for the life he was born to lead - and Ashlenn, a spirited ingenue who is forced to abandon her position in Taysan society.

The books are a mixture of adventure, soft-core spy thriller and police procedural, with running character arcs and a bit of romance thrown in. The series is intended to be ongoing, according to the website

Not to be confused with the actual Space Force, the sixth and newest branch of the US armed forces, commissioned in December 2019