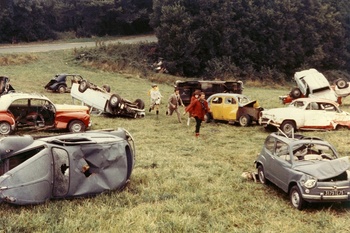 Roland and Corinne are an awful, awful bourgeois married couple. Each are carrying on affairs. Each in fact is planning on murdering the other. Neither can pull the trigger yet, though, as they've been slowly poisoning Corinne's multimillionaire father, and they have to get the inheritance first. Having heard that Corrine's father is at death's door, they leave Paris and go off to see him in the countryside.

The above description doesn't really do justice to the craziness of Weekend, which has stuff like Marxism lectures, a weirdo who sings when he makes telephone calls, Emily Brontë wandering about the woods babbling nonsense, more car wrecks than one would expect to see outside of a war zone, dead bodies lying all over the place, and last but not least, hippie cannibals.

, the radical from The French Revolution, who is strolling through a meadow in 1967 reading from his own works, because this is that kind of movie. He also appears as the weirdo who sings on the phone.

Not to be confused for Weekend, a 2011 gay romantic drama.