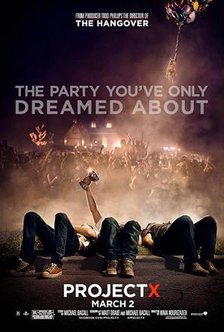 A.K.A. Wild Teen Party: The Movie.

Project X is a 2012 found footage film produced by Todd Phillips (of The Hangover fame) and Joel Silver (of Lethal Weapon, Die Hard and The Matrix fame). It is about three teenage boys, Thomas, Costa and J.B., who decide to celebrate the former's 17th birthday with the most epic party in the school's history, after promising Thomas' parents that nothing crazy would happen to their house while they were gone for the weekend. Unfortunately for them, as the partygoers pour in, the situation quickly gets out of their control.

The filmmakers made a point of keeping many of the film's details secret so as to increase the mystery and hype surrounding it, seeking out unknown actors and using what was originally meant as a placeholder title as the film's actual name. It has mostly gotten negative reviews from critics, though it was received slightly better with audiences and also turned out to be very profitable.

Not to be confused with the 1987 movie

of the same name, which was about Matthew Broderick and a bunch of chimpanzees in the Air Force, or the 1968 William Castle film. Or the video game Project X Zone.