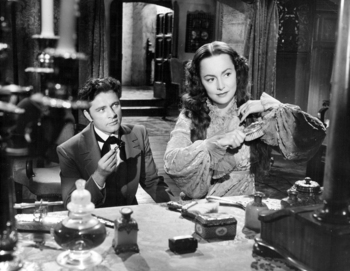 My Cousin Rachel is a 1952 film directed by Henry Koster, starring Richard Burton and Olivia de Havilland. It is based on the 1951 novel of the same name by Daphne du Maurier.

It is set in coastal Cornwall in the early 19th century. Phillip Ashley (Burton) is a callow youth who has grown up in the lap of luxury, as the ward of his uncle Ambrose. When Phillip is in his early 20s uncle Ambrose goes to the warmer climates of Italy to restore his health. From there he sends Phillip a letter telling him that he is getting married to a woman named Rachel Sangaletti, the widow of an Italian count.

Phillip is disappointed to read that his uncle's return home is delayed but he grows even more concerned when more disturbing letters arrive. Written in an unsteady scrawl, they tell Phillip that Rachel and her lawyer friend Guido are conspiring to murder him. Phillip sets off for Florence but arrives to find that his uncle has already died and that Rachel has gone away. Guido brushes off Phillip's suspicions, telling him that the estate was left to him and not Rachel, and that Ambrose's accusations were the result of a brain tumor that left him mentally unbalanced.

Phillip returns home. Eventually his "cousin Rachel" (de Havilland) shows up for a surprise visit. She is beautiful and charming, and passionate Phillip soon finds himself falling in love with her and giving her a generous allowance from the estate. But soon events take a turn, Phillip finds himself ill for the first time in his life, and he starts to wonder if Ambrose was right after all.

Hollywood film debut and Star-Making Role for Burton, who had made a name for himself on the London stage but whose movie career had been only a few scattered parts in the British film industry. A movie comeback role for de Havilland, who had taken three years away from Hollywood to act on the stage.

The book was adapted again to film in 2017, starring Rachel Weisz as Rachel, Sam Claflin as Philip, Iain Glen as Nick, and Holliday Grainger as Louise.