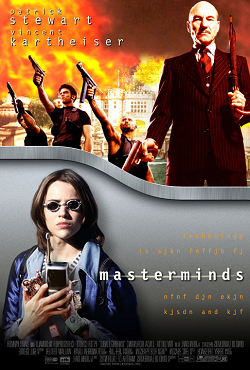 The criminal mastermind of the century just met his match.
Advertisement:

Oswald 'Ozzy' Paxton (Vincent Kartheiser) is a Playful Hacker who is forced to take his stepsister Melissa (Katie Stewart) to her prep school Shady Glen (where he was kicked out after a prank) after being busted by his parents for downloading an illegal copy of the game Scream II (no relation to the film). Before leaving, Ozzy decides to pull one last prank...until he sees men armed with guns arriving on the scene.

Turns out Rafe Bentley (Patrick Stewart—yes, that Patrick Stewart), Shady Glen's new head of security, has hatched a plan to hold the children of Shady Glen as ransom to extort money from their wealthy parents. So now Ozzy has to use his hacker skills to save the day.

Not to be confused with the 2016 comedy film.