Film / Lifeforce
aka: The Space Vampires 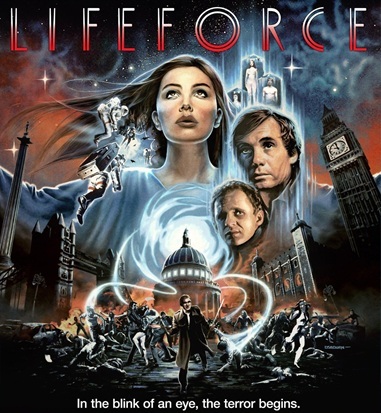 "I mean, in a sense we're all vampires. We drain energy from other life forms. The difference is one of degree. That girl was no girl. She's totally alien to this planet and our life form... and totally dangerous."

Lifeforce (1985), possibly better known as the "Naked Space Vampire Movie", is—a very strange film, directed by Tobe Hooper for The Cannon Group. It is based on an equally strange sci-fi novel by Colin Wilson.

In 1985, a European Space Shuttle mission to Halley's Comet finds in the comet's tail an abandoned spacecraft with three (apparent) naked humans, two men and a woman, in suspended animation encased in glass pods. Later, after taking the pods aboard, the Shuttle goes out of contact with ground control. A rescue mission finds that all the crew are dead but the three people in the pods are still alive. The three not-really-humans are brought to Earth, whereupon they wake up, blow the hell out of the European Space Research Center, and escape. Meanwhile, the sole survivor of the shuttle's crew, Col. Carlsen (Steve Railsback) has returned to earth in an escape pod with a tale of terror...

And then it gets even weirder. Has to be seen to be believed.