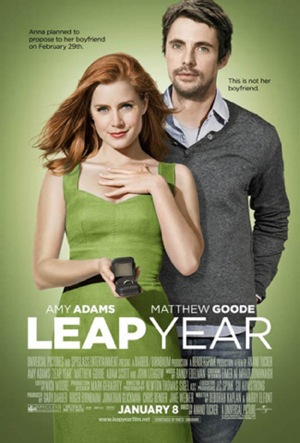 Uptight Bostonian Anna (Adams) travels to Ireland hoping to propose to her boyfriend (Adam Scott) because according to Irish tradition a woman can propose to a man on February 29 during a leap year and said boyfriend happens to be attending a convention in Dublin. Unfortunately bad weather forces her plane to divert to Wales and when she tries to reach Ireland by boat she ends up dropped off at Dingle (about as far away from Dublin as you can get while still being in Ireland). She ends up hiring local innkeeper Declan (Matthew Goode) to drive her to Dublin so she can get there by the 29th. Hilarity Ensues.

For the unrelated 1921 film, see here. If you're looking for the trope about the 29th of February, see Leap Day.