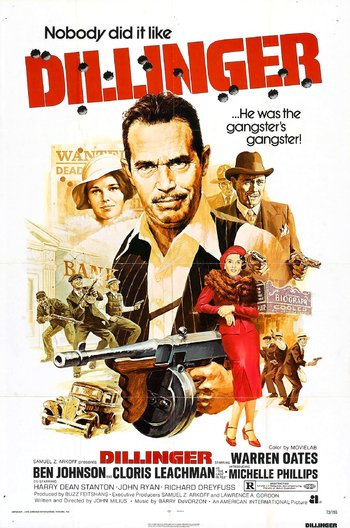 "My buddies wanted to be firemen, farmers, or policemen, something like that. Not me. I just wanted to steal people's money!"
—John Dillinger

A 1973 biopic/gangster film chronicling the life of Depression-era bank robber John Dillinger. Directed by John Milius, the film focuses of the Dillinger gang's crime spree through the Midwest during the early 1930s and FBI agent Melvin Purvis' dogged pursuit of the criminal.

Warren Oates portrays the gangster as a larger-than-life celebrity who is both feared and revered by the public. Dillinger is an egotistical mastermind who believes his own press and views himself as an immortal force of nature, the "best damn bank robber" around. On the flip side, Ben Johnson plays FBI agent Purvis, who sees it as both his duty to apprehend the notorious criminal as well as a personal quest to seek vengeance for the Kansas City Massacre, a violent attack that left several federal agents and police officers dead. Cloris Leachman portrays brothel owner Anna Sage, who agrees to finger Dillinger for Purvis in the hopes of preventing her deportation from the U.S.

Compare the 1945 Dillinger made by Monogram Pictures, which unlike this version's more realistic portrayal, has the title character as a blood-thirsty maniac. The big-budget Michael Mann-directed Public Enemies (2009) would also cover similar territory, somewhat glossing over Dillinger's character. Milius later wrote two made-for-TV sequels, Melvin Purvis: G-Man and The Kansas City Massacre, starring Dale Robertson as Purvis. (Steve Kanaly appears in the first film, but as a different character.)