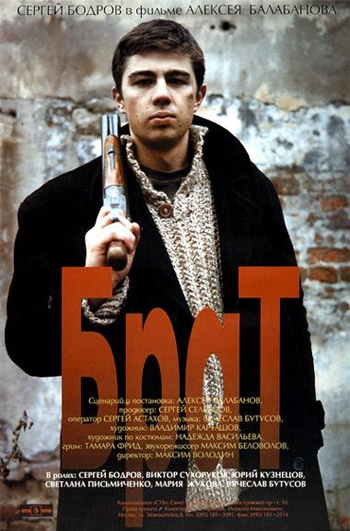 А в чём сила, брат?
The city is an evil force. The strong come and become feeble. The city takes the strength away. And now you've fallen.
— The German
Advertisement:

Young war veteran Danila Bagrov returns home from the First Chechen War to a rapidly changing Russia and tenuous job prospects. His overbearing mother sends him to Saint Petersburg to work for his well-off brother, Viktor — not knowing that the latter has become a hitman for a mafia boss named Roundhead (Krugly).

After helping his brother out with a job, Danila is thrust into the dangerous world of organized crime. As if that wasn't taxing enough, he must also work through identity issues of defining his culture and community — issues faced by many young Russian men after the dissolution of the Soviet Union and the rapid westernization of Russia.

Brat enjoys cult status in Russia due to its valuable social commentary, a fantastic soundtrack consisting mostly of Russian rock songs, and an accurate depiction of lawless Russian realities in the 1990s. The film's protagonist Danila has also become something of an icon: while neither conventionally intelligent or charismatic, he has street smarts and strong principles, and is relatable as a Russian everyman (he has served in the army, listens to Russian rock, wears secondhand clothes, and always stands up for the oppressed and the disenfranchised).

By popular demand, a sequel (Brother 2 aka Brat 2) was released in 2000, but any hope for a third installment was tragically extinguished in 2002, when Sergei Bodrov and his crew were killed by an avalanche while filming an unrelated movie in the Caucasus mountains.