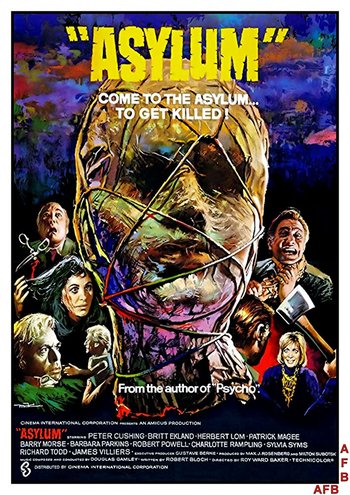 Asylum (also known as House of Crazies in subsequent US releases) is a 1972 British horror film made by Amicus Productions. The film was directed by Roy Ward Baker, produced by Milton Subotsky, and scripted by Robert Bloch (who adapted four of his own short stories for the screenplay).

Dr Martin arrives at a secluded asylum "for the incurably insane" to be interviewed for a job by the wheelchair-bound, authoritarian Lionel Rutherford. Rutherford explains that he owes his current incapacitation to an attack by an inmate.

Rutherford reveals his unorthodox plan to determine Martin's suitability for the post of chief doctor. One of the asylum's current inmates is Dr B. Starr, the former head of the asylum, who underwent a complete mental breakdown. Martin is to interview the inmates of the asylum to deduce which one is Dr Starr. If his choice is correct, Rutherford will "consider" him for the post.

The attendant Max Reynolds admits Martin through the security door to the inmates' solitary confinement cells, where he interviews each in turn. He hears stories about 1) the revenge of a murdered wife, 2) a tailor who makes a suit with some highly unusual qualities, 3) a woman who questions her sanity when it appears that her brother is conspiring against her, and 4) a man who builds tiny toy robots with lifelike human heads.

Nothing to do with the KISS album of the same name.