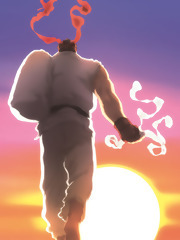 Where am I now? No matter, the answer lies... IN THE HEART OF BATTLE.
Advertisement:

Fresh off of his latest clash with Akuma, Ryu finds himself in the middle of the Ninja World, more specifically Konoha! Now back in his teenage body, he must survive a world of new fighting styles, energy attacks, and 'ninjas'.