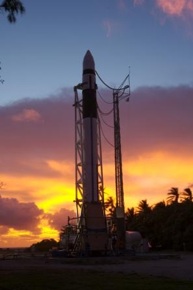 It's all prepped and ready! Just strap in and push the Big Red Button!
"GET ON WITH IT!"
— God, Monty Python and the Holy Grail

Oh, c'mon, people, this proposal has has been slumbering at the bottom of the Trope Launch Pad for eons now! It already has over 30 replies and who knows how many hats! Do you realize what a pain in the ass sorting all these examples will be? Just launch this monster already, before it grows even more and starts rampaging across downtown Tokyo!

A common syndrome among Trope Launch Pad entries is when the original poster of the entry for some reason (forgot about it/had no internet/write your own excuse) starts ignoring it without previously declaring it Up for Grabs. In this case, instead of being launched immediately after accumulating a critical example mass and finding a nice name, the entry stays in discussion for weeks, repeatedly bumped by people who find it tropeworthy but dare not launch it themselves out of fear to offend the original poster.

Also, if you think yourself smart for declaring an entry Up for Grabs and hope that somebody will launch it, we have bad news for you: no one will. Instead, the entry will accumulate another 60 replies and go down because nobody would ever want to sort that mess out. Or just go down as it is, because everybody is busy monitoring and launching their own tropes. Either way, your trope ain't gonna get launched, period. So take responsibility for your creations, damn it.

However, the same corollary applies here as in Godwin's Law in that this rule cannot be invoked deliberately in order to steal proposals. Yeah, like that's gonna happen.