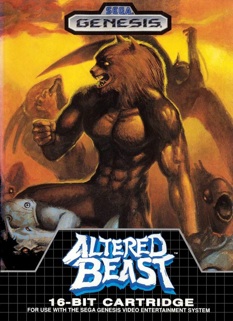 WIIIIIISE FWOM YOUR GWAAAAVE!
—Sound compression making the game's opening memorable for the wrong reasons.note Keep in mind, this sounded AWESOME when it was released!
Advertisement:

A Beat 'em Up by Sega, appearing at the arcades in the late 1980s, and later ported to home consoles like the Sega Master System and Sega Genesis. Two pseudo sequels were made, one for the Game Boy Advance titled Altered Beast: Guardian of the Realms, and a PlayStation 2 reboot titled Project Altered Beast (which was released in Japan and Europe, but not in America). The main gimmick is that your character can turn into various humanoid monsters, like werewolves and dragons.

Interestingly enough, the first game of this series is considered by many as a cult classic game and an average game at the same time. The reason is because the Sega Genesis port was extremely similar to the arcade version in gameplay, sounds, and even graphics. *  although hardware limitations prevented the inclusion of the rather impressive (for the time) scaling effects sequences seen on the arcade original This doesn't sound awesome nowadays (we even have a trope called Polished Port), but don't forget we are talking about the late '80s, ports were either terrible, different, or simpler games.

Storywise, the original game has Zeus' daughter Athena being kidnapped by the evil sorcerer Neff and two centurions being resurrected to rescue her.

In Project Altered Beast the story follows a man called Luke Custer who is a "Genome-Cyborg," a human whose DNA and other genetic make-up has been artificially altered allowing micro-chips containing the genetic make-up of other creatures to transform him into an anthropomorphic beast. After surviving a helicopter crash, Luke loses his memory and sets off to learn about the truth behind his past and the Genome-Cyborgs.

Neff in his "Van Vader" form was included in Wreck-It Ralph for a very brief cameo role, although he was colored purple in that film. To be fair, that was his color after he took enough damage in the game. This design would later be used for his appearance in Sega Heroes.

The PS2 game (Project) Altered Beast has examples of these tropes:

Altered Beast [Rise From Your Grave]

The barely audible clip from the 80s arcade game that started it all.

Example of:
Rise from Your Grave

Altered Beast [Rise From Your Grave]

The barely audible clip from the 80s arcade game that started it all.