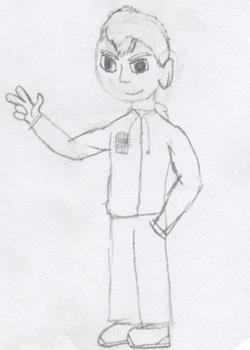 A drawing made of me by one of my friends.

A young teenage kid who spends way too much of his time playing Video Games rather than making use of his life. He spends much of his time playing emulators, mostly on Vizzed, but has his own somewhat extensive collection of games. Also a Nintendo junkie since childhood; though he has played on other consoles, he doesn't own any Non-Nintendo systems.

In Real Life, tends to alternate between a Cloud Cuckoo Lander and an Idiot Hero, occasionally dipping into Idiot Savant territory. Outside of gaming, he is a dedicated member of his school Marching Band and Indoor Drumline. Also an aspiring author, currently in the process of writing a novella series. Also writes Fanfics in his spare time.

Aside from games, he is an Anime fanatic. His favorite anime are Zatch Bell, Gurren Lagann, Death Note, Trigun, Karin, Wolfs Rain, The Boondocks, and Azumanga Daioh.

Oh, and he's a music freak. His favorite band is Sonata Arctica, though he likes just about all types of music.