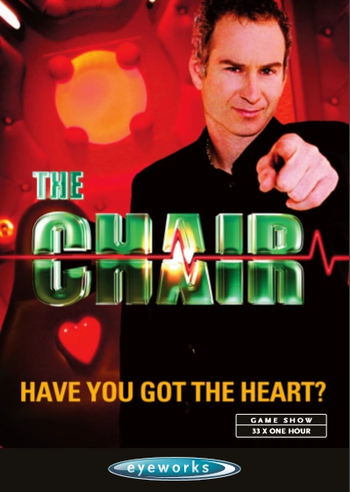 What do you get when you take a person, a chair, a pit that probably represents Hell, and someone who's practically The Devil himself (well, in the world of tennis anyway)? You get this short-lived ABC Game Show hosted by tennis analyst and former player John McEnroe, who was best known for several infamous on-court confrontations during major tournaments. The show was in fact a Kiwi creation for Touchdown Television (now Eyeworks Touchdown) by Julie Christie, Darryl McEwen and Brian Bigg.
Advertisement:

Contestants were asked a variety of questions while seated in the titular chair (which was elevated above a giant pit they entered the studio from), going up a money ladder of seven questions which added to the player's bank (which began at $5,000 and could go up to $250,000). However, contestants were analyzed prior to the show to gauge their reaction to sudden events, and to establish their resting heart rate. If a contestant's heart rate went a certain percentage over their resting heart rate at any time after a question was read (starting at 60% or 70% above, referred to in-game as "redlining"), the contestant would start losing money for every second they were over the threshold. The contestant was not allowed to answer the question until their heart rate decreased again, and the game ended immediately if the bank fell all the way to zero. (Redlining between questions or while a question was being read carried no penalty.)

The redline penalty increased from one question to the next, starting at $100 per second and increasing to $1,000, and the threshold was lowered by 5% of the contestant's resting heart rate after every question. Two "Heartstopper" rounds were also played in between questions; the player had to endure a random event of Nightmare Fuel for 15 seconds, such as a fake alligator lowered from the ceiling or McEnroe serving tennis balls at them, while still subject to the redlining rule. If the player was over their threshold after time expired, their bank would still decrease until their heart slowed again.

The show wasn't a hit, and it had to compete with FOX's even more diabolical The Chamber. Neither lasted long, but The Chair was objectively considered to the better (and safer) of the two.