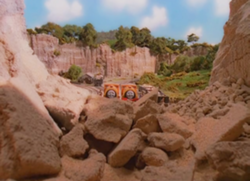 Bill and Ben are working at the quarry and are bored of doing the same thing. Ben asks Bill if he can hear something different, to which Bill replies that he cannot hear anything different. Ben then states that everything sounds and looks the same and that they need a surprise. Before Bill could answer Ben, the Quarry-master comes with a message from The Fat Controller that they have to go to the harbor.

Bill and Ben head to the harbor worried that they did something wrong and blame each other on the way. The Fat Controller asks Bill and Ben to shunt trucks while Edward is taking the children on a trip. Bill and Ben meet with Gordon, who asks them to behave here since they are on the Mainline. Bill started to tease Gordon about the time they saw him and thought that the harbor was the scrapyard. This made Gordon furious and orders the twins to get his coaches ready for his evening train and fumes away.

The twins started working to organize the trucks, stating that they know all about trucks, but they did not. The trucks wanted to help Bill and Ben to organize the harbor and the twins thanked them unknowing that the trucks were playing tricks on them. Evening came and everyone was complaining of how messed up the harbor was. As a result, the yard gets in a mess, causing Gordon to be late with the Express.

The next day at the quarry, a rock slide was about to occur. The alarm started and the Quarry-master alerted everyone of the rock slide. Bill and Ben waited for them to get in the trucks. Bill leaves with the Quarry-master being left behind, but Ben waited as he climbed aboard and everyone got out just in time as the landslide devastated the quarry. Bill and Ben hoped that The Fat Controller would understand that it was not their fault. The next day, The Fat Controller arrives on board Edward and praises the twins as heroes and for saving the day. Bill and Ben think that being called "heroes" is quite a nice surprise.