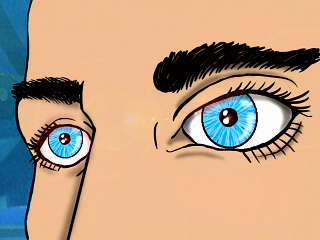 An actor named Beck Bristow is offered the starring role in a series called Seaforce Nine, but the producers require him to audition and the agent thinks he needs actual experience at an underwater research station.

Sealab prepares itself for Beck Bristow's visit. Quinn is not pleased that they'll have to babysit some actor. Beck arrives, and makes it clear that he will not remember anyone's name.

Beck, surprisingly, knows quite a bit about reactors, but otherwise is as vain and shallow as Quinn predicted. Stormy, Quinn, and Sparks are ordered to dig a trench for Beck, in which they find out that he's going to pick one of them to come with him and be a technical adviser for Seaforce Nine. Sparks and Stormy immediately suck up.

Beck then proceeds to seduce Debbie in the hot tub, but refuses to sleep with her. He decides to kill a shark and have it served for dinner. Quinn, angry that Beck killed the shark and hit on Debbie, yells at him and threatens to kick his ass, while Stormy just tries to get some cole slaw. Beck is impressed by Quinn and chooses him as technical adviser, and they leave for the surface.

The Stinger: Beck is told they decided to make Seaforce Nine a cheap adult cartoon instead, and Beck makes Quinn clean his pool.

The Other Stinger: Beck Bristow advertising himself and a website about him (which in reality redirects to the Sealab 2021 page on adultswim.com).