Matt and Shelby have left Los Angeles and move into a seemingly perfect yet mysterious house in North Carolina. It's not long before strange things start to happen. 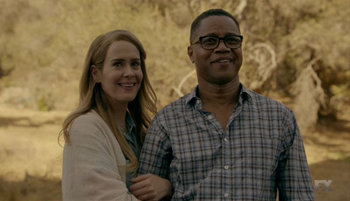 Shelby and Matt are giving testimonials about their victimisation in Los Angeles for a reality TV show entitled My Roanoke Nightmare. During the incident, the couple were attacked by a gang resulting in Shelby suffering a miscarriage and Matt being seriously injured. They decide to relocate to North Carolina in order to avoid any further violence. The couple discover a farmhouse from what looks to be the colonial era. They're intrigued about the property and decide to purchase it for $40,000, outbidding a hostile family of locals.

The couple begin repairs on the house. In the evening, they are interrupted during sex by a howling outside. Matt goes to investigate and assumes they're being targeted due to being an interracial couple. The following day, Matt goes away on a business trip, leaving Shelby alone to continue working on the house. A hailstorm begins outside and when Shelby goes to investigate further, she discovers the hailstones are actually human teeth falling from the sky. When Matt returns that night, Shelby is frightened however the teeth have disappeared.

Shelby continues to worry when Matt pursues a sales position involving a lot of travelling, meaning she will be alone. When Matt is away, Shelby decides to use the outdoor hot tub. She's suddenly pushed under the water by what appear to figures in colonial-style dresses and outfits, carrying pitchforks and torches. When Shelby goes to the police, they find a lack of physical evidence leading to their scepticism. Shelby begins to fear the house and wishes to move however she keeps her thoughts to herself for now. The following morning, Matt finds a dead pig on the doorstep but rather than tell Shelby, he buries it in the woods so as not to worry her further.

In order to keep Shelby company whilst he's away on work, Matt persuades his judgemental sister, Lee to move in. He also sets up surveillance cameras hidden around the property so that everything is recorded. Lee's background involves criminal psychology however she was fired from her job after becoming addicted to prescription pain medication. Lee's newly found sobriety puts her at odds with Shelby, who enjoys drinking wine.

As Matt is away, he receives an automated alert from the security system at the house. Lee and Shelby are engaged in a shouting match so miss Matt's calls. Matt can see the perimeter of the house has been breached by intruders carrying weapons, just as Shelby had described previously. Lee hears an intruder in the house, interrupting the women's argument. They both track shouts and cries coming from the basement and go down to see what's happening. There, they find a TV set turned on with a video playing. The video shows a man tracking a creature with a pig head. The electricity suddenly cuts out and the women can hear a mob upstairs in the main house. When they eventually go back up, they find the house has been strung up with wooden dolls and totems hanging up.

When Matt gets home, Shelby and Lee show him the video from the basement. He deduces that the group are just trying to intimidate them and that the video is fake. Shelby wants to leave however Lee wants to stand their ground. Matt reminds Shelby that they've invested everything into the house and have nowhere else to go. A car engine starts outside and Shelby begins driving away. She's distracted when she goes to answer a call from Matt and hits an old woman, causing her to roll over the windshield. The woman manages to get up and vanish in the woods with Shelby pursuing her on foot. Shelby becomes lost when she stumbles into a clearing, complete with more of the hanging totems. Shelby becomes more terrified as the ground seems to move. When she runs further into the woods, she's surrounded by the mob. A man with the top half of his skull missing, stumbles at Shelby's feet.