Lee's daughter, Flora visits the house. Meanwhile, Matt and Shelby discover a cellar that may hold the secrets to the mysteries of the house. 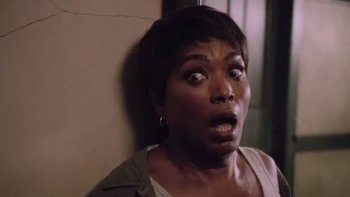 A dramatic re-enactment follows Shelby being chased through the woods. She happens upon a gathering of people, lead by The Butcher. The group are part of a village who are currently roasting the scalped man over a fire, complete with a pig's head covering his own and a pig's tail nailed to his rear. The Butcher is accusing him of deserting the village and hoarding vital provisions. As the man's muffled screams are heard, The Butcher spots Shelby watching and demands that she's caught. Shelby takes off and makes it to the main road where she's nearly hit by Lee in her car.

Lee has taken Shelby to the hospital to get checked over. She's telling the police about her findings with the human sacrifice and the village. She's cleared of any drugs in her system and when the investigating officers follow up her story, they find no evidence of anything happening. The next morning, Shelby tells Matt that she believes the villagers have created a hoax to try and drive them away from the house. However, she's determined to stay put.

Lee's ex-husband, Mason brings over their daughter, Flora to stay. Flora begins exploring the house and befriends Priscilla, another little girl who no one else can see. Lee brushes it off as Flora playing with an imaginary friend. Flora tells Lee that Priscilla will make her a bonnet if they can "make the blood stop". Later in the evening, Lee hears glass breaking in the house and discovers a bonnet and the remains of a broken vase.

Shelby is unsure that Flora staying right now is a good idea however Matt says that they don't have much choice until they can sell the house; Lee still needs to see her daughter. During the night, Shelby is woken up by the sound of a pig squealing outside. Both herself and Matt go into the woods to investigate and end up separated. Shelby comes across the sacrificial fire. At that moment, Matt finds her and they both discover roasting meat and a wooden effigy that Matt swiftly destroys. He directs police to the site and the couple decide to post out a bulletin for Ishmael Polk and his sons (the family who lost the bid for the house).

Later that night, Matt is woken up by a ringing phone. Upon answering, the voice on the other end says, "Please. You're hurting me". He then finds that the phone is unplugged. He immediately experiences a vision where two nurses are seen killing a bedridden woman. The nurses laugh and graffiti the walls with her blood, writing the letter "M". Terrified from the vision, Matt goes outside to speak to the officers posted to guard the property. He screams at them that there's intruders in the house however, as before, nothing is there. Matt begins to question whether he's suffered damage from the attack back in Los Angeles. Lee starts to worry that the police won't take them seriously if they keep calling them out for nothing.

Mason arrives to collect Flora, who's playing hide and seek with Priscilla. However, when she's hiding in the cupboard underneath the stairs, Flora finds that Priscilla has disappeared. She offers Priscilla her doll in exchange for not killing her family. Upon hearing what Flora has said, Mason quickly takes Flora away and vows to never bring her back.

A devastated Lee breaks her sobriety that night with Matt finding her in the kitchen. Above her, kitchen knives are stuck in the ceiling. Shelby calls for Matt to confirm that there's a woman standing outside on the front lawn. They go out to the lawn at that spot and find a door that leads into a cellar.

Back inside the house, the two nurses are watching Lee. Lee feels like someone or something is watching her and as she gets up to leave her room, she finds twitching pig tails nailed to the wall. She stumbles backwards and sees the Piggy Man appear in the mirror. Just as quick as they appeared, the visions Lee sees disappear.

Shelby and Matt find an old VHS camera in the cellar with an intact tape inside it. The tape shows a video of a man called Elias Cunningham, who describes the same supernatural incidents happen to him in 1997 that are happening to Matt and Shelby now. He speaks about how he's been studying a pair of nurses named Miranda and Bridget Jane. They used to operate a nursing home within the house and chose their patients based on the first letter of their names. They had begun to spell out the word "Murder" however they never finished and the last letter is missing. Regardless of the attempts to paint over it or cover it up, the next tenants who moved into the house would always find the word appear again. Matt runs back to the house and pulls back the wallpaper in that room, finding the painted letters on the wall. Elias goes on to explain the other activities of the house and that the nurses had been stopped in their murder spree due to them. The final footage on the tape is of a woman appearing suddenly in the mirror. Matt and Shelby quickly leave the room when a loud noise alerts them. They find a bloody cleaver lodged in the front door.

The bank refuses to give the couple a refund on their investment of the property, citing that the auction had absolved the bank of any responsibility. The bank agent leaves as Lee arrives with Flora, a direct violation of the custody agreement with Mason. Shelby takes Flora into the living room so Matt can discuss Lee's reckless actions. Shelby speaks to Mason on the phone to try and relieve some of the situation, knowing that Lee is aware of her massive mess up. Meanwhile, Flora can see her friend, Priscilla beckoning her from the front lawn.

Returning into the kitchen, Shelby tells Mason that Flora is safe and well at the house with them. Lee goes into the living room and sees that Flora is gone; the front door is open. A frantic search through the woods sees Flora's hoody at the top of a tree, at least a hundred foot above the ground.