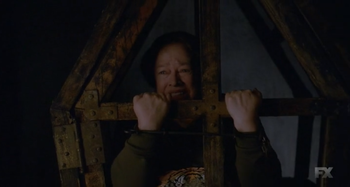 Fiona finds new purpose in a dangerous love affair. A night out with Delphine causes Queenie to question her place in the coven. Cordelia makes a fateful decision about her mother.

In a tattoo parlor, prior to the end of many of their lives, Kyle argues the merits of the band Toto while his frat brothers get tattoos. When they pressure him to get one as well, he explains his future plans to be an engineer (inspired by the Hurricane Katrina levee failures), and that he doesn't want to ruin his reputation with a tattoo that could repulse government officials. In present day, a chained Kyle examines his body and finds tattoos from his brethren, and realizing that his limbs are not his own. Zoe observes him, a gun hidden behind her back. Madison monologues on the plight of the Millennial Generation and its indifference to suffering and emotional pain. She explains that throughout her life she experienced things that would cause pain, like her parents, the paparazzi, and being gang raped, but has coped by remaining dulleed by her varied vices. Following her resurrection, she has become numb to any feeling and cannot die by simple means like overdosing on medicine or binging on food. She has cured her skin problem that makes her look like a zombie, but her inability to feel remains. She yearns to feel something, realizing that being numb to pain is worse than feeling it, and wants to give all she has and what she will have in the future just to feel it.

Zoe apologizes to Kyle, trying to understand the suffering her ability inflicted on him. He acquires the gun and nearly shoots himself in the head, but Zoe stops him, realizing she doesn't want him to die.

Queenie grumbles when she finds Madison's leftover remains of food after her binging, leaving the fridge practically empty. Delphine comes out due to the noise, saying she is hungry too. They bond over midnight munchies and go to a drive-thru burger shack. Delphine is ecstatic at the food. Queenie recounts her move from Detroit all the way to New Orleans just to live with her "sisters". Not very close with them, she ends up bonding with "an immortal racist". Delphine suggests that despite Queenie's efforts to bond with the other witches that her efforts will fail due to racial differences.

Hank drunk calls Cordelia in the middle of the night, he is in a bedroom surrounded with heavy artillery and threatening to carry out Marie Laveau's commands, but Cordelia abruptly ends the call. She goes out of her room to look for Delphine, who is still out with Queenie. Madison runs away to avoid being detected, but Cordelia hears her and assumes it is Spalding. She tries to walk on her own, and nearly falls down the stairs, but Madison intervenes and pulls her away. Her voice, along with skin contact, leads Cordelia to see Madison's resurrection and the vision of her mother, Fiona, murdering Madison.

The Axeman and Fiona enjoy a nightcap in a shabby apartment. They talk about his past, and his job as a jazz player. She excuses herself to his bathroom and, while primping her hair in the mirror, results in some hair fall. This distracts her from the fresh corpse (the apartment's owner) hidden in the bathtub, revealed to be the man in the apartment's photographs The Axeman claimed to be a famous jazz player. She is shaken by her hair fall but acts normal in front of the Axeman. As they have an intimate moment, she finds more hair falling off. He tries to entice her to stay, but she insists on leaving this failing one-night stand. She tells him the truth about her personality, including the fact that she had three husbands and destroyed every good relationship she's ever had, including Cordelia. He holds the door and seduces her into staying after all for some jazz-inspired sex. During a climax, the light bulbs start exploding.

Zoe is trying to trust Kyle and to rehabilitate him to functional humanity. Progress is slow, and Kyle is frustrated. Madison enters one of these sessions, and asks who Kyle is. Zoe reminds her about her hand in Kyle's death (Kyle ran after his frat brothers to try and stop them after he caught them gang raping Madison, but he was knocked out in their bus when he tried to fight them as they were fleeing the scene, and Madison flipped the bus over and killed Kyle and all but two of the other frat brothers) and how she helped resurrect him. She tells Zoe that Cordelia wants to meet with her, and that the headmistress is more aware than Zoe realizes. Zoe leaves Madison and Kyle alone, and Madison describes their shared afterlife experiences. She asks if he saw a light after death, because she didn't, and the darkness and coldness of being dead is somewhat more bearable than living a numb life. They hug awkwardly.

At Cornrow City, just as Marie is getting her weekly order of fish heads for her gumbo, she finds Queenie standing at her door and lets her in. Over gumbo, Marie tells Queenie about Delphine, and how she felt insulted by Fiona when she dug Delphine up and gave her comfortable living arrangements. She tells Queenie everything that only furthers Queenie's insecurity about being in the Coven, and offers Queenie a chance to live with the Voodoo, where they understand her black culture better, in exchange for Delphine. Queenie leaves, considering the offer.

Cordelia tells Zoe about the brevity of being able to release the Axeman, and with her two powers, makes her a target like Madison was when Fiona killed her. She convinces Zoe that Fiona killed Madison when she thought Madison was the next Supreme and was draining Fiona's powers, and Zoe will be the next murdered one if Fiona finds out. They conspire to kill Fiona. Zoe re-enters her room to find Kyle having sex with Madison.

Fiona dresses to leave the next morning and reveals that she is aware of the corpse in the bathtub. She says she's called the police, but he doesn't believe her. He thinks she seeks an emotional connection, and he counter-reveals that he's been watching her since she was eight years old, when Fiona stood up to an older witch named Helene who took pleasure in using her telekinesis to spill the milk of her weaker sister witches; Fiona uses her telekinesis to keep hers standing, and the bully attempts to force her to pour it on her head. She instead throws it at Helene, who pushes her off her chair. Helene dies shortly after, when the plate cabinet falls on her, and Fiona has always thought that was her unintentional doing. He originally saw her as the daughter he never had, but watched her grow up to be a fierce woman and fell in love with her. Fiona is intrigued and repulsed by his obsession.

Spalding wakes up in the middle of the night tied to his bed, and when Zoe, who is sitting by his bed, asks him how he is, he is surprised his tongue has been restored. The enchantment of his tongue has kept it preserved, and Zoe found it in the hidden compartment of Madison's closet in a box with Myrtle Snow's initials. Spalding didn't know that Myrtle had kept it, and Zoe reattached it with a ritual while he slept. She establishes that the truth enchantment is still in place by interrogating him, finally confirming that Fiona killed Madison. His family has served the coven for ten generations, but his life's devotion to Fiona does not make him subject to the same rules. This allows Zoe to stab him in the chest without penalty from the Council.

Delphine slices a ham, and Queenie enters. The girl asks the maid what her worst act was, saying she can get closer to her if she knew Delphine's horrible side.

A flashback shows her black servant, Sally, serving ham for dinner to Delphine and her husband Louis. Louis and Sally are non-verbally flirting, and Delphine notices this, but says nothing and comments that she hasn't seen her for two weeks, and asks her about rumors on her giving birth to a boy with "complexion as white as cream". Sally confirms this but hasn't given a name yet. Louis suggests the name Pierre, since he's always wanted a son named Pierre. Delphine takes note of that, picking up on the subtlety that that boy is Louis' son, and kindly offers Sally, a new mother, to leave the kitchens and work as her handmaiden to help with her beauty treatments while her daughter Borquita is still in "punishment" (she and her half-sisters are imprisoned in the attic of horrors due to jokingly plotting their mother's murder), which Sally accepts. Delphine menacingly looks at a wary Louis. Later that night, Delphine tells her that none of her expensive treatments work, except her own concoction. She plays a game with Sally, asking her to guess a secret ingredient of her own treatment. Sally guesses blood, and is correct. Delphine tells her that that mixture is extra special, and tells her that it came from her newborn son, revealing that she knows about her and Louis and calls her a whore and that she doesn't need to give that baby a name anymore.

In the present, Delphine tells Queenie that she didn't want to have that baby living in their house, and since he was a male and Louis' son, could lay a claim to their fortune. She says that Sally jumped off the balcony and crushed her skull, with Louis finding her outside. They buried her with her baby's body. She tells Queenie that she's learning to change, and is glad that she has a friend like her to guide her.

Fiona nearly shaves off her hair, but a sensual memory makes her reconsider.

A bloody Zoe showers, and is greeted by Madison. Zoe tries to act nonchalant about Madison's acts with him earlier. Madison says she's not done with him, since being with him is the only time she can feel something, but that if Zoe wants him that they need not take turns. Madison leads Zoe to their room, where Madison and Kyle pull Zoe to the bed and pull her towel off.

Back at the jazz bar, Fiona offers a delighted Axeman a drink.

Queenie leads Delphine to Cornrow City in guise of beauty treatment. Delphine is incredulous when Marie arrives with her posse. Locked into a cage in Marie's workshop, Delphine screams and cries. Queenie accept the offer to make the first cut, and Marie copies Delphine's "beauty treatment" of blood. The Voodoo Queen declares it "beautiful".