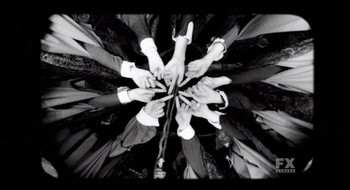 Cordelia rallies the girls in the fight to stop Fiona but a dangerous new enemy puts Misty in the crossfire. The rivalry between Marie Laveau and Delphine comes to a head.

Queenie walks under a bridge at night in the bad part of town and a man approaches, threatening her. She picks up a board with nails in it and punctures her own hand, making him bleed, then whacks him with it for good measure. Madison and Zoe find her and ask her to come back. Queenie says Marie Laveau set her straight about them not being her true friends and that she is working for the voodoo now. Madison taunts her, pointing out that she stayed even after Fiona slit her throat, while Queenie ran away because she was feeling left out. Zoe says that a new Supreme is rising and Queenie mocks her, asking if Zoe thinks it's her, since Fiona had also lied and told Queenie it could be her. Queenie proceeds to take the beating heart of the man, explaining to the witches that Marie needs a dark heart to make a potion to give Queenie more powers, and the man had raped three school girls already. She tells them that witchcraft and voodoo is too big to fit in New Orleans, and they are both in the losing side of the upcoming war.

Fiona talks about her pain as a cancer victim, which makes her hair fall off, her face look older, and weaker in power. While in bed with the Axeman, she tells him she has about a month to live, and he suggests running away to make the most of her life with him. She tells him that she's not afraid of dying, but she's afraid of him watching her decay. He suggests suicide then, but she tells him that she wants to stay alive just to spite those who want her dead. A flashback shows that when she told Cordelia, Cordelia coldly asks her to die before Thanksgiving so that she wouldn't have to make her horrible stuffing. She knows that her cancer is increasing at a rapid rate because a new Supreme is flowering, and she has to figure out which one of the witches it is.

While cleaning Luke's wound, Luke's mother chews him out for going over to the Academy, saying the girls are using devil's magic. He insists that they saved him, but she slaps him, saying only Jesus can save him. She says he's unclean from the inside out and mixes up an enema and forces him to strip.

Across the street at the Academy, Nan can hear his pain, but is asked to focus on the plan of killing Fiona. Madison says she wants to be the one to kill her by slitting her throat, but Cordelia tells her that they need to plan Fiona's death at the proper time, and Madison needs to be kept hidden from Fiona a little while longer. Nobody answers the doorbell, and Cordelia wonders where the help went, not knowing that Zoe killed Spalding and Delphine is a prisoner of Marie in Cornrow City. Zoe answers the door, and it's Misty, saying that someone tried to kill her.

A flashback reveals that, one night, Misty was awaken by Myrtle, still covered in mud. Misty assumes this is because Myrtle is confused, but Myrtle warns her that a man with a shotgun has been circling Misty's home. Misty cannot hear the sound of animals outside her home anymore, and realizes Myrtle is telling the truth. They escape and hide in the swamp before the man enters Misty's home and blasts her bed.

Zoe tells Cordelia that Misty is a fellow witch who needs protection. Cordelia takes her hand and sees Misty burning, her burnt corpse going through a treatment which heals her body, recognizing her as Misty Day. She welcomes Misty to the Coven, and Misty asks if her friend can stay as well. The witches follow her to the greenhouse, where Cordelia calls out for Misty's friend. Myrtle responds, and hugs Cordelia. Myrtle is almost back to normal, with some scarred skin and an imported wig in place. Cordelia confirms that Fiona killed Madison. Myrtle points out that resurrection is "a feat more difficult than all of the Seven Wonders" and that Misty has already proven capable of it, and declares that Misty is the next Supreme.

In her room, Zoe gives Kyle a children's website to help him learn to talk. He tries to kiss her, but she pulls back. Madison joins them and kisses him, telling Zoe not to be afraid to be intimate with him because they're sharing him now.

Downstairs, the Coven gets ready for a ritual known as The Sacred Taking. They don red robes and black lace veils. Zoe isn't sure Misty is the Supreme, which causes Madison to taunt her for thinking it was her. Nan tries to imply that she has a chance too, but is teased by Madison. Cordelia tells them being a Supreme isn't a gift, it's a burden. Misty hears this, and doesn't want to be the Supreme, but Cordelia tells her that she doesn't get to choose. Whoever it is will be it after Fiona dies.

Cordelia explains the Sacred Taking ritual is invoked to protect the Coven, and has been used three times before, once during the Salem witch trials. In it, a Supreme takes her own life to ensure the safety of the coven, hurrying the transition to the next young Supreme who is more powerful than the last at her age. Madison doesn't think Fiona will kill herself. Not without a push, Cordelia says.

Up in her room, Fiona heaves into the toilet. The clock turns to midnight and Season of the Witch starts playing. Fiona comes into her room to see Madison dancing around, claiming the room for herself and what she will do to the furniture in the room. She lies to Fiona, saying she's the next Supreme and brought herself back. She taunts that, as a Supreme, as Fiona's powers become weaker, her's become stronger. Fiona, shocked, sees a mirror of what Fiona did to the Supreme before her, Anna Leigh Leighton. Madison tells Fiona that everyone knows about her return, and by tomorrow, she will burn at the stake for killing her. Madison gives her an option to burn tomorrow, or swallow pills and die tonight.

Madison leaves and Fiona starts packing. Myrtle appears, saying that Madison resurrected her and leaving wasn't an option Madison gave her. Fiona breaks down, saying she can't die because she's finally found somebody who loves her and will take care of her in her last month. Myrtle convinces Fiona that the Axeman will eventually grow impatient waiting for her to die and will leave her on her deathbed.

Back in the hallway, Madison reports that Fiona thinks Madison is the next Supreme. Nan wants to know why they think it couldn't be her. Madison says it's because she has no style and her pits smell like fish sticks. When Nan asks Zoe, she can't answer, and Nan storms out and goes to Luke's house. She doesn't notice Hank waiting in his car outside. Nan goes inside and finds Luke screaming in one of the closets.

In her room, Fiona is preparing her body for her death. She asks Myrtle to get her fur from the closet as she reminisces about a great love affair and living her life selfishly. Fiona puts on her coat, talking about not staying too long at the party. She asks Myrtle to look after Cordelia, her most terrible failure. Fiona downs a handful of pills and tells Myrtle to hang her portrait in the spot she chose, not in the basement with the disgraced Russian witch. Fiona gathers herself and lies down in bed. Myrtle helps herself to Fiona's jewelry and walks out.

Fiona wakes up when she hears a voice calling to her, which turns out to be Spalding. He wants to give her something to purge the pills. She notices he's able to speak. He explains that he was murdered. 'Those idiot girls thought they could silence me, but they've only given me voice here in the spirit world. Three-hundred years my family has been a clan of watchers and now I see everything', he says. He tries to get her to take the ipecac.

She says she's trying to do something noble and decent for the coven. 'Horse——. You're making a martyr of yourself by giving up', he says, saying she's been tricked by lesser witches.

He tells her Madison isn't the next Supreme, she was brought back by some dirty little swamp witch (Misty).

He feeds her ipecac.

She throws up her pills in the bathroom. 'Oh, Spalding. You've always been my silent sentinel, and I will avenge your murder. Right after I avenge my own', Fiona says.

Back at Marie Laveau's, Queenie brings Delphine La Laurie her favorite fast food. Marie has been bleeding Delphine to make her potions and keeping her locked in a cage. Delphine asks Queenie what she did to deserve her betrayal. She asks Queenie to let her out, but Marie interrupts them.

Marie lords over her captive, but Delphine scoffs at her, pointing out she can't die. With Queenie gone, she turns ugly and laments the darkie in the White House. Marie goes for a large sword and tells Delphine she suffers from lack of imagination.

Delphine sticks her hand out of the cage for a moment and Marie grabs it and hacks it off, warning Delphine she's just getting started.

At the Ramsey's, Nan and Luke head for the door. She kisses him on the cheek. Then they run into his mother, calling 911 to report and armed intruder. Luke tells her they're leaving and she can't stop them. She's in the middle of threatening him when a rifle sight appears on Mrs. Ramsey and she's hit twice. More bullets come through the windows and Luke dives in front of them to protect Nan and is hit.

Back at the Academy, downstairs they wait for Fiona to die and Misty to feel something. Fiona comes down, definitely not dead. She asks where the swamp witch is.

Misty is across the street as paramedics are taking Luke to the ambulance. Fiona joins her and gets the rundown by spelling a cop. He tells them Luke has a grievous head wound and the mother is dead. Fiona challenges Misty to bring Joan Ramsey back.

Cordelia steps outside and looks around the Ramsey's house. She finds a bullet and sees it's trajectory and knows it was meant for witches. Inside, Misty brings Joan Ramsey back, and slumps to the ground.

Kyle is playing with his children's program when Zoe comes upstairs, upset. She tells him they're under attack and wants to get him out of there. He tells her he loves her. Madison hears them and cries.

In the morning, Cordelia faces Fiona, waiting for her to lash out. Fiona says they demonstrated real grit, and she finally has hope for the future of the coven. She tells Cordelia shes proud of her. Fiona sees the blessed silver bullet Cordelia found, it means witch hunters. Cordelia tells Fiona they need her now, more than ever. The doorbell rings and Fiona wonders again where the servants are. She sees a cardboard box on the porch and, after scanning it with magic, takes it inside. She opens it. Delphine La Laurie's head stares back at her and whispers help.