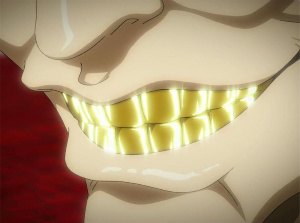 Gold has been used by dentists as filling for cavities as well as prosthetic teeth for centuries, because of its resistance to corrosion. Gold teeth are also somewhat of a status symbol and a symbol of wealth in certain parts of the world. In Fictionland, it can also be an indicator that a character is wealthy, but characters with gold teeth tend to be villains at least most of the time, perhaps because it can also be an indicator of greed, ostentation, and conspicuous consumption. In Real Life often associated with The New Russia in Europe, since gold was commonly used in Soviet dentistry (now mostly phased out with modern ceramics).

Silver teeth seem to be less common in fiction. At times it might be accompanied by an Audible Gleam. It can be a realistic justification for a Twinkle Smile. A common feature of Pirates in fiction. Bonus points whenever it is also the given nickname of the character.

The act of stealing these teeth for their gold can serve to make a villain especially chilling, depending on how exactly they get them. Someone who murders people for their gold teeth or pulls them from living people's heads will come across as particularly brutal, while stealing gold teeth from the dead may make the perpetrator seem far more ghoulish or unsentimental than simply going through a dead man's pockets for change would. Someone taking out their own gold teeth typically indicates extreme gratitude, charity or desperation.

A Sub-Trope of Gold Makes Everything Shiny and Made O' Gold.