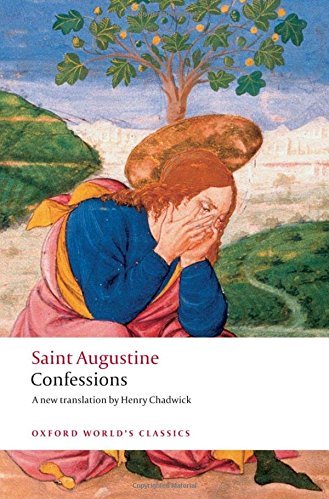 "Yet man, this part of your creation, wishes to praise you. You arouse him to take joy in praising you, for you have made us for yourself, and our heart is restless until it rests in you."
—St. Augustine of Hippo, The Confessions (John K. Ryan translation)
Advertisement:

Ever learn about evil from pears? Avoid baptism for the sake of your sex life? Join a Cult that vomits gods from fruit? Have a hole in your heart only Love Himself can fill? If you answered "yes" at least once, then Saint Augustine's Confessions might be the book for you.

The Confessions is an autobiographical work written around 397-400 A.D. by St. Augustine of Hippo. It outlines his sinful youth and eventual conversion to the Christian faith. Here, he examines the nature of evil, sin, lust, goodness, faith, and happiness, and can be seen as a guide for people struggling with such issues.

The Confessions is seen as one of St. Augustine's most important works. It is one of the earliest examples of an Autobiography and became influential for Christian writers throughout the Middle Ages.

The work is usually published with the name The Confessions of Saint Augustine to distinguish it from another autobiographical work of the same name, written by Jean-Jacques Rousseau.