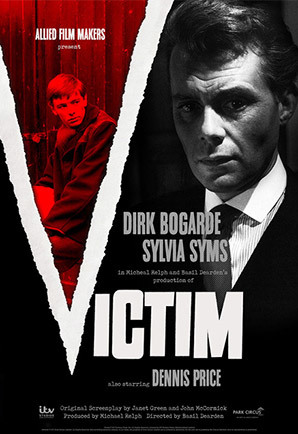 A groundbreaking British suspense film about Melville Farr (Dirk Bogarde), a closeted gay barrister who puts his marriage and his thriving career at risk when he takes on a ring of blackmailers targeting gay men. Directed by Basil Dearden of Sapphire and The League of Gentlemen.

Originally released in 1961, six years before homosexuality was decriminalised in the United Kingdom, the film was highly controversial, earned an "X" rating from the British censors (modern releases have been labelled "PG"), and was for a time banned in the United States.

Notable as the first film to use the term "homosexual," thanks to Dirk Bogarde, who refused Basil Dearden's suggestion of "inverts" as a euphemism and rewrote several scenes himself. It's worth noting that Bogarde himself was gay, and considered Victim an extremely personal project.

Victim has been widely credited with impacting British support of gay rights. None other than Lord Arran, who introduced the legislation repealing the Criminal Offences Act, wrote Bogarde praising the film as helping to create a climate where such reform was possible. Vito Russo, author of The Celluloid Closet, singled Victim out as the first film he watched which didn't make him ashamed to be gay.