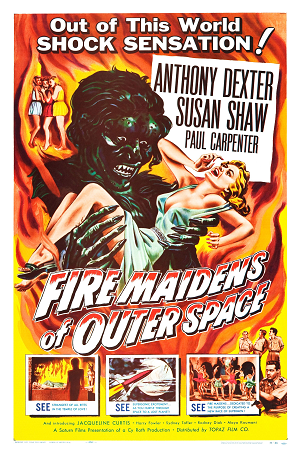 A 1956 Science Fiction Film‎ written, produced and directed by Cy Roth; rivals Lost Continent and Star Trek: The Motion Picture for sheer glaciality of pace. Only the Mystery Science Theater 3000 treatment could make this snail watchable. On the other hand, it has lots of pretty ladies...

The plot (such as it is) follows a space expedition to the newly discovered 13th moon of Jupiter, where the astronauts are captured by a bevy of young women (the titular "fire maidens", so called only because of one scene at the climax) who turn out to be descendants of the fabled Atlantis, and who need breeding stock as well as protection from a mysterious creature lurking about.