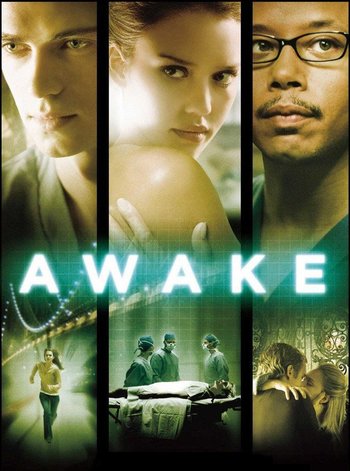 Each year, over 21,000,000 people receive general anesthesia. The vast majority go to sleep peacefully. They remember nothing. 30,000 of these patients are not so fortunate. They find themselves unable to sleep. Trapped in a phenomenon known as Anesthesia Awareness. These victims are completely paralyzed. They cannot scream for help. They are... Awake.
Advertisement:

Awake is a medical thriller by director Joby Harold, starring Hayden Christensen, Jessica Alba, and Terrence Howard. The film was released in 2007 by The Weinstein Company.

Clayton Beresford Jr. (Hayden Christensen) has a lot going for him. He's the heir to a powerful business empire, is obscenely rich, and is engaged to a beautiful, loving woman named Sam (Jessica Alba). However, he has two major problems. The first is that, despite being engaged for six months, he hasn't worked up the nerve to tell his mother that he has been dating her personal assistant behind her back. The second problem is that he has a bad heart... and without a transplant, he could die from a heart attack at any moment.

In one fateful evening, his fortune seems to turn. After finally breaking the news to his none-too-pleased mother, he and Sam elope that night. And then, while the newlywed couple prepare to spend their first night together as husband and wife, his pager goes off... and Clayton finds out that a matching heart has just arrived at the hospital. After they noticeably take their time getting to the hospital, Clayton says goodbye to his new bride and his terrified mother as he's wheeled off to the surgical table.

As the anesthesia sets in, Clayton thinks of Sam as he prepares to drift off to sleep, confident that he's in the capable hands of his surgeon and best friend Dr. Jack Harper (Terrence Howard). As the minutes go by, he jokingly comments the cocktail his stand-in anesthesiologist gave him doesn't seem to be working, but none of the surgical team pays any attention to him. He starts to realize that something has gone horribly wrong when he can feel them prepping the incision area, and his fears are confirmed when Dr. Harper slices his chest open and begins cracking his ribcage. Clayton is still awake. He can see and feel everything. But no one can hear him.

Then, just when he begins to push through the excruciating pain, Clayton hears something that chills him to his very core: his doctors are discussing their plans to kill him by making it look like he received a faulty donor heart. Trapped in his own mind, Clayton futilely screams for help, but to no avail. He's going to die, and there's nothing he can do to stop it.

Not to be confused with the TV series Awake, or the 2021 Netflix original sci-fi film.

Awake contains examples of the following: