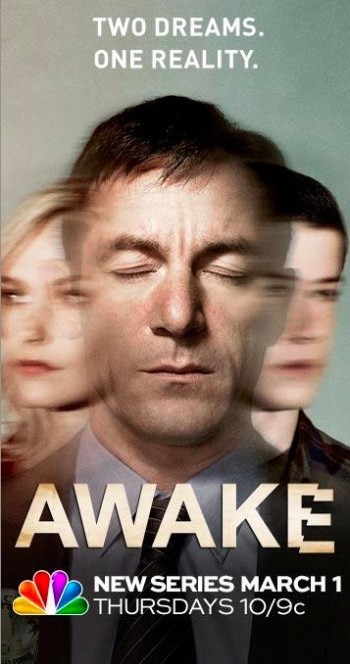 Dr. Evans: Well I can assure you, Detective Britten, this is not a dream.
Michael Britten: That's exactly what the other shrink said.
Advertisement:

A high-concept cop drama premiering in February of 2012 in which Police Det. Michael Britten, played by Jason Isaacs, lives a double life in two separate realities after being in a car accident with his wife and son. In one reality, his wife Hannah (played by Laura Allen) survived the accident, but their son Rex (played by Dylan Minnette) did not. When he falls asleep, he goes into the second reality, where the exact opposite happened; Hannah died, but Rex did not. The show follows Britten going about his life in each reality, mourning for his wife, son, and both, in the two realities, as well as seeing two separate psychiatrists who have contrary opinions on the significance and psychological benefits of the "subconscious alternate reality" that he's created for himself.

While he's moving between these two worlds, Britten also has to deal with trying to solve crimes in the standard Cop Show procedural, with a different partner in each reality, and with the twist that the cases-of-the-week that they're working on are connected in ways that he doesn't always understand. It's up in the air which (if either) of the realities is a dream.

Despite exceptionally positive critical reviews, the series had poor ratings, and was cancelled after 13 episodes. Interviews like this

offer additional wrap up and insight as to the series had it gone on. Thus far, it has not been released on DVD or Blu-Ray.

Note: Not to be confused with the 2007 movie Awake.