Staryu and Starmie are echinoderms, and specifically starfish; they are among the few Pokémon that lack visible eyes, the other being Zubat. 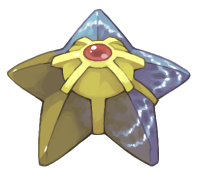 Staryu are a tan-brown in color, with a golden formation forming the bulk of its body mass and disappearing behind its body; in the center of this formation is a bright pink organic gemstone; the core, which provides it and its evolution with its myriad abilities and can be seen as its lifeforce.

Upon evolution, Starmie turn deep violet, and the core now resembles a cut precious stone. It also gains a second star, resting upon its back; this second star is able to turn a full 360° and is capable of rapidly spinning while the primary star stays still.

The core of a Staryu or Starmie is essentially its lifeforce; without it, they would shrivel away and die. The core acts as a signifier of its mood and health; a healthy Staryu or Starmie's core glows brightly, intensifies if under high emotion, and dims under sickness, shutting off completely at death. Cracking the core will weaken it quite a bit until its healed, but shattering the core will kill it instantly. 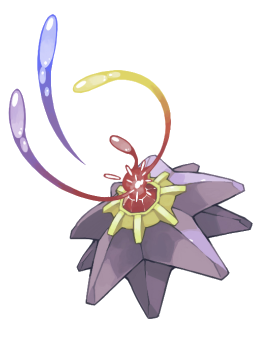 Among the abilities provided and sustained by the core are:

Not for nothing are Starmie given the epithet "the gem of the sea"; the core glows in the many colors of the rainbow (though red is predominant) and - due to the fact that a specimen must be dead to obtain it - can fetch very high prices on the black market.

Like other watery invertebrates, they prefer to live in deep sea trenches or underwater caves during the daytime. At night, however, they freely float and drift along the surface, basking in the starlight; they seem to "connect" with the heavenly bodies in some unknown way.

Staryu and Starmie are filter-feeders, and feed on plankton. They are still capable of consuming Poffins, berries, and other such sweets; the core will directly absorb the required nutrients on exposure.