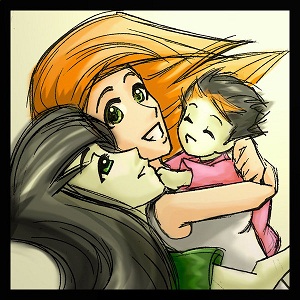 • The Pathetic Tale of Bonnie Rockwaller

• The Cat Came Back

• The Unknown Adventure of Ann Possible

Side Stories:
• The Difference Between You and Me

• The Burden of Leadership

is the beginning of an entire universe of stories, and one of the most widely celebrated Kim Possible fanfics out there. Written by Blackbird

, writer of growing popularity among the Kim Possible and The Batman fandoms, who also borrows a few elements from popular writer NoDrogs

. The stories are imaginative, the dialogue is always a treat to read, and the series is all around well-written and consistently entertaining.

The story begins, as many do, with one of Drakken's plans going awry. While trying to impregnate Kim Possible with a retrovirus fired from a special gun, he misses and hits Shego instead. This leads to Shego becoming pregnant, which turns her against her employer and causes her to seek out the "father:" Kim Possible.

Like many Comic Books, the series features multiple continuities. There's a second branch of stories, called "Another Possibility", that follows right after a different ending for the first story.

The series is also notable for its many, many OCs, all of whom feel fully developed and fit right into the universe that the author has created. There are also more cameos that you can shake a stick at, which ventures into Crossover territory at times. The author has taken a break from the series at the moment, but it's far from over.

Now with a audio reading by Martialartfruituser

This series of fanfics contains examples of: