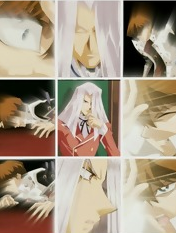 Glass is a Yu-Gi-Oh! fanfic written by Bellamy-Taft.
Advertisement:

Seto Kaiba wakes up trapped in a room with a glass wall, and is told by his so-called host, Pegasus, that he is there to provide Pegasus with company. He soon learns others—Mokuba, Yugi and his friends—are trapped there as well, and after struggling to find out why they were all taken, his thoughts turn to escape. With no way out but cooperation, Seto struggles to find an escape while playing Pegasus's latest game.

Glass can be found here

, details a universe where everything that could go wrong did. Unlike Glass, which was more focused on mind games, Shattered features body horror and explicit violence alongside the psychological aspects and is not for the squeamish.

Has nothing to do with the Interactive Fiction retelling of Cinderella by Emily Short, or with the 2019 film by M. Night Shyamalan.