Characters / Wolverine And The X Men The X Men

A list of characters from Wolverine and the X-Men. 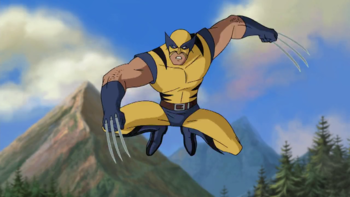 Wolverine in his original suit.

Haunted by memories of the life that was stolen from him, Logan, also known as Wolverine, is a rebellious loner forced into being the reluctant leader of the X-Men after the disappearance of Professor Charles Xavier and Jean Grey. Wolverine has a rapid healing ability and indestructible adamantium metal claws capable of slicing through almost any substance known to man make him a fearsome combatant. Only with the help of the team can Wolverine hope to protect the world from its own bleak future and continue Xavier's mission of peace.

See here for tropes applying to him in The Avengers: Earth's Mightiest Heroes!. 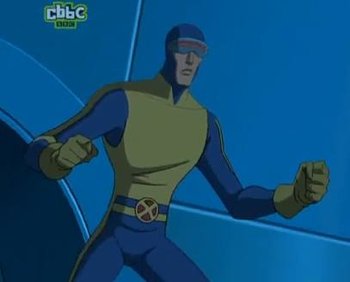 Cyclops in his original suit.

Scott Summers, also known as Cyclops, was once the optimistic leader as well as one of the founding members of Professor Xavier's X-Men, but when he lost the two people he cared for most, he also lost the drive to lead the mutant heroes. Cyclops may begrudgingly work with Wolverine and the X-men to prevent a future that looks darker every second, but inside he is alone. Cyclops has the mutant ability to project beams of pure energy from his eyes yet he can only control or block them when he is wearing a visor or sunglasses made out of ruby-quartz material or closing his eyes. If not when he opens his eyes, he will uncontrollably shoot optic blasts at whatever he is trying to see. 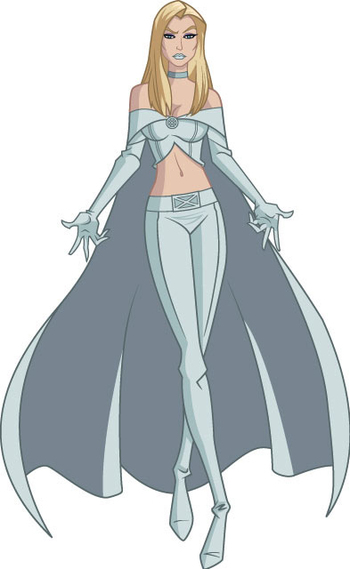 Emma Frost is a mysterious and beautiful telepath who showed up on the X-Men's doorstep just when they needed her most. She once tried to start her own school for gifted mutants, the Massachusetts Academy. The ambitious Emma is the X-Men's only hope of finding their missing colleagues in addition to being a mole and still the White Queen of the Inner Circle (and even kicks off the events of the series as it's revealed she's the one who attacked Jean and Professor Xavier, which in turn ended up destroying the mansion—albeit with the intention of taking out the Phoenix before she could be a threat). She can read minds and project thoughts into other's minds, controlling their actions. She can also project mental blasts to knock out her victims by touching their brow and is able to change her skin into diamond form. 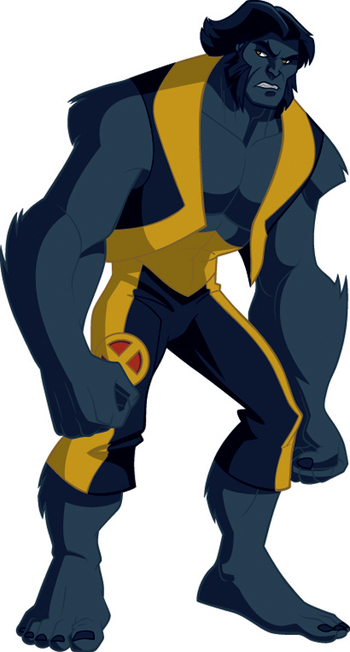 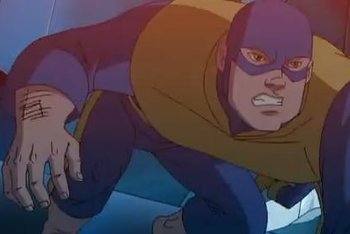 Beast in his original form with original costume on.
Though blessed with the agility and strength of a great ape, the blue-furred Henry McCoy, also known as Beast, is one of the founding members of the X-Men and has the greatest asset of having a keen scientific mind. Beast possesses a genius-level IQ, with extraordinary expertise in genetics, biochemistry and other subjects. Beast often acts as the voice of reason for Wolverine and the X-Men.
Voiced By: Fred Tatasciore
Storm/Ororo Munroe

Orphaned at an early age, Ororo Munroe turned to a life of crime to survive on the mean streets of Cairo, Egypt. When her mutant power to control weather patterns emerged, she was worshipped as a goddess by the tribes. Eventually, Ororo found her true purpose at Professor Xavier's School for Gifted Youngsters, where she helps the X-Men as Storm. Storm is able control the weather and create rain, snow, sleet, fog, hail, and lightning. 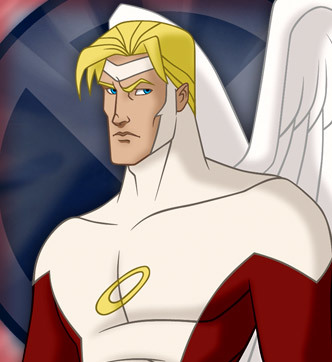 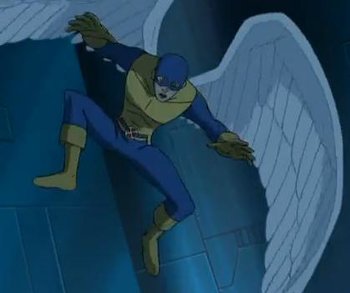 Angel in his original suit. 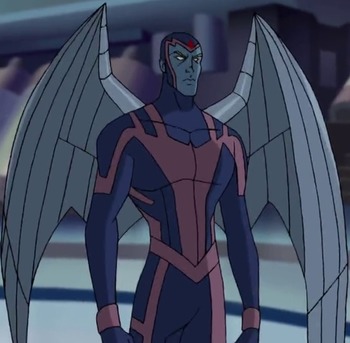 Born and raised in affluence, Warren Worthington III, also known as Angel, is one of the founding members of the X-Men and is forced to hide who he has become to spare his own intolerant family from embarrassment. As such, he leads a dual life. One playing the dutiful heir to the family fortune, and the other as the mysterious Angel, who uses his abilities to help those in need and is a member of the X-Men. That is until his wings were damaged in a clash with the MRD and amputated during surgery at the hospital due to them being damaged beyond repair. Angel is approached by Mister Sinister who uses his technology to transform Angel into Archangel. Angel's wings can carry up to twice his weight and can fly him to 29,000 feet at speeds up to 159 mph. His enhanced lungs enable him to breathe at high altitudes and he possesses extraordinary eyesight.

Kitty Pryde, also known as Shadowcat, might be able to become immaterial and able to "phase" through solid objects and living organisms, but her devotion to Professor Xavier's School for Gifted Youngsters is anything but insubstantial. Enrolled in the school since she was only thirteen, the spunky young mutant called Shadowcat serves as a cheerleader for Xavier's mission and a valued teammate to Wolverine and the X-Men. 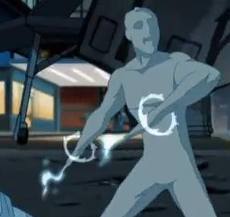 Iceman in his original form and suit

Bobby Drake, also known as Iceman, is one of the founding members of the X-Men. He thinks he's the coolest guy around, but his cockiness may sometimes cause trouble. However, Iceman's ability to project intense cold and convert moisture into ice, forming a variety of icy weapons, protective ice shields and ice slides, has nonetheless made him a valuable asset to Wolverine and the X-Men. 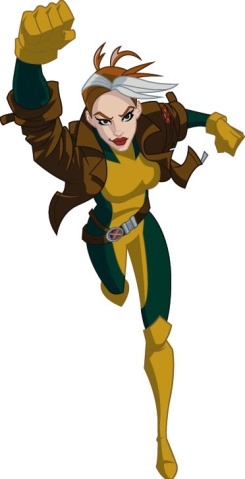 Raised by numerous foster families, the young woman known only as Rogue has learned to look after herself. Her mutant ability to drain the life energy, memories and powers of anyone she touches forced her to keep those she cared about at arm's length, literally. Rogue has found a home at both Xavier's School for Gifted Youngsters and Wolverine and the X-Men.

Because of his demon-like appearance, the only place that circus performer Kurt Wagner, also known as Nightcrawler, ever felt truly welcome was at Professor Xavier's School for Gifted Youngsters. Nightcrawler is able to teleport himself and a limited amount of extra mass over short distances. This mischievous, German-born mutant consistently proves himself a major asset to Wolverine and the X-Men. 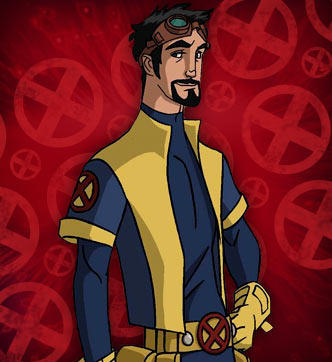 Forge is a mutant with a superhuman talent for inventing and repairing mechanical devices. While even the greatest inventors must work out the principles and designs of their inventions, the ideas for Forge's inventions spring fully formed from his mutant mind. He is the main technician at the X-Mansion and has a bionic right hand and left leg. 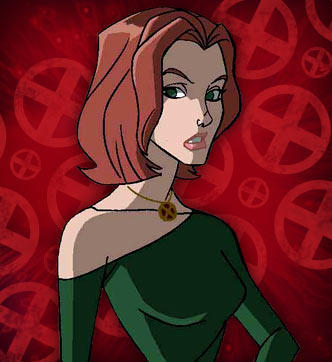 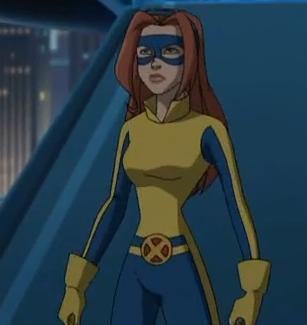 Jean in her original X-Man suit
Jean Grey is a mutant born with telepathic and telekinetic powers. She can read the thoughts of others, influence and control their minds, project her mind into the astral plane, and generate telepathic force blasts that can stun enemies. She can also lift and move objects telekinetically and create telekinetic shields. Jean is also one of the founding members of the X-Men and is missing due to an explosion.
Voiced By: Jennifer Hale