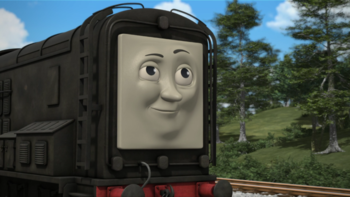 "Your worthy Sir Topham Hatt thinks I need to learn. He is mistaken. We diesels don't need to learn, we know everything. We come to a yard and improve it. We are revolutionary!"
Voiced by: Michael Brandon (US; Seasons 13-16), Martin Sherman (US; King of the Railway - Season 18), Kerry Shale (UK; Season 13 - present US; Season 19 - present)
Basis: British Railways Class 08 0-6-0DM
Built: 1952

The first diesel to visit the Island of Sodor, Diesel believes that diesels are better than steam engines, and wanted to "revolutionize" Sodor. He left and came back several times before becoming a permanent part of the railway.

A metropolitan-vickers diesel who works on Edward's station. Was initially referred as "The Diseasel" by Bill and Ben and was the subject of their tricks until Edward soon put a stop to their games. 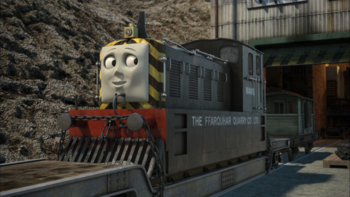 "If we use the teensiest bit of Toby's line, we can save all this bother."
Voiced by: Teresa Gallagher (UK; Hero of the Rails - present, US; Season 17 - present), Jules de Jongh (US; Hero of the Rails - Blue Mountain Mystery)
Number: Fharquay Quarry 1
Basis: British Railways Class 04 0-6-0DM
Built: 1962

A feisty diesel that works at the quarry. She started off as a cheeky young engine who thought she knew what was right, but matured into a kinder and more motherly engine over time. 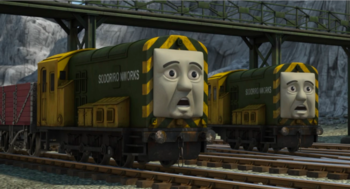 Also known as the Smelter Twins, 'Arry and Bert work at the scrapyards and are bullies to all steam engines. Multiple times, they have threatened and shown desire to smelt down the steam engines for good. 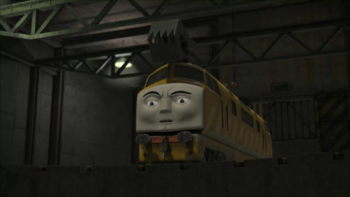 I can do whatever I want! I'll get him too! With Pinchy!
Voiced by: Neil Crone (Thomas and the Magic Railroad), Matt Wilkinson (Day of the Diesels - present)
Basis: British Railways Class 42 'Warship'

The major antagonist of Thomas and the Magic Railroad. A large warship diesel with a mechanical claw on his roof, he was out to destroy Lady and Mr. Conductor, but was defeated thanks to Thomas. He has returned several times in the show's run as a permanent part of the railway.

A soft-natured, if somewhat ditzy diesel who works with the Narrow Gauge engines in Blue Mountain Quarry. Friendly towards steamies, but tends to hang with a bad crowd. 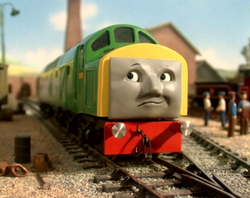 A diesel who was sent to Sodor to help the engines, but insults them by saying they were out of date. He gets his comeuppance as he breaks down by an inspector's bowler hat. The Diesel crept away and leaves behind "a rather nasty smell and a battered bowler hat". 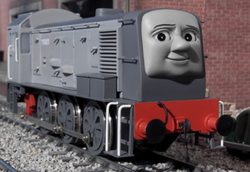 A diesel who is lazy. He takes advantage of Thomas by letting him do his work for him, but after he reversed into a ditch, he learns his lesson, and with the help of Thomas, he gets his work done, and promises to be a Really Useful Engine. He has a twin named Norman. 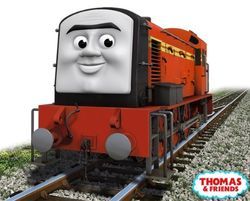 An orange-red Diesel and is Dennis's twin. 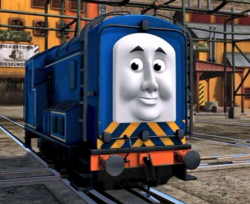