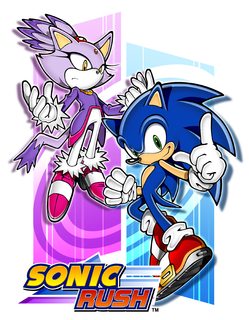 The Sonic Rush series is a pair of games in Sega's Sonic the Hedgehog franchise developed by Sonic Team with Dimps and released for the Nintendo DS: Sonic Rush (2005) and Sonic Rush Adventure (2007). Both games are similar to the Sonic Advance trilogy in that they are reminiscent of the classic side-scrollers for the Mega Drive/Genesis.

A gameplay feature introduced in this pair of games is the Sonic Boost; while holding down the X or Y buttons, your character will gain a boost of speed as long as the tension meter is not empty; the meter can be filled up by destroying enemies and performing tricks. The Boost would later be a major part of gameplay in later 3D Sonic games.

These would notably be the last "original" Sonic games that Dimps made before they switched to making adaptations of Sonic Team-made console games for handhelds. Also, while not connected to this series (as it doesn't feature Blaze as a playable character), the DS version of Sonic Colors is regarded as a Spiritual Successor due to its similar gameplay and mechanics, on top of also being developed by Dimps.