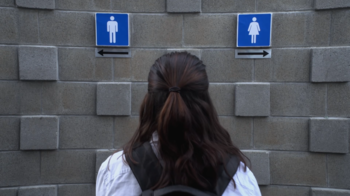 They/Them is a 2020 South Seas Film & Television School production from New Zealand about a troubled teen coming to terms with their nonbinary identity.

Ash is conflicted about their gender. Writing a poem about their womanhood, they think they're just a girl even though being a woman doesn't feel right to them, but neither does being a man. The next morning at school, a transfer student joins their class and asks to be called by her nickname, Charlie, instead of "Charlotte".

After their teacher reviews their poem and tells them she's looking forward to seeing them perform it in class (to their dismay), Ash asks their teacher to refer to them with their chosen name as Charlie had the same option. However, their request is immediately dismissed, and the school bullies aren't going to let Ash see the end of it.

They/Them can be watched on YouTube for free, here