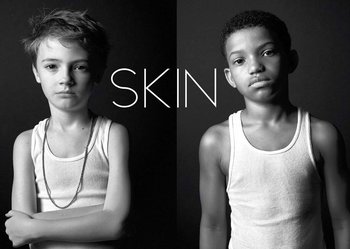 Skin is a film based in apartheid-era and post-apartheid South Africa, following the life of Sandra Laing, a black girl born to white Afrikaner parents. The story drops many anvils about racism and living as a black person in apartheid-era South Africa (to be expected, given the setting). The story progresses from when Sandra is a schoolchild, to when she begins searching for a husband, to casting her vote in the first free elections of a post-apartheid South Africa. The film was given 10 awards in 8 different film festivals and nominated for one in another. It features Sophie Okonedo as Sandra, Sam Neill as Sandra's father, Abraham, and Terri Ann Eckstein as Sandra's mother, Elsie.

Also based completely on a true story, as the "Where Are They Now?" Epilogue will show you.