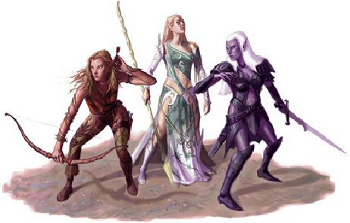 Elves are known for two things:
1. Thinking they're better than everyone else
2. Living a really long time
"Everything you can do elves can do better, elves are much better at everything than you."
— Lords and Ladies

They are also quite aware of that fact and will let you know it, again and again and you won't argue about it (most of the time). After all, they've quite often been around for a lot longer than those upstart humans. The flavor of this betterness will vary across stories and authors between all-natural, magical, or just plain nasty. Some of them might even be humble and will make sure you know about it.

The reason for this goes all the way back to Papa Tolkien. His elves are Purposely Overpowered in just about every way (not only in the ways that they particularly value). He invented the modern version of Elves, who, Tolkien being a devout Christian, in his works were meant to represent what humans would be like had we remained sinless and Unfallen™. Deprived of these theological undertones, the modern image of Elves has since lost its original context.note However, Tolkien's Elves learned to stop being snooty about it because humans proved to be very good allies against Morgoth. The relationship between elves and humans is further complicated by the fact that humans can get away from evil by dying while elves can't. This is the cause of much Fantastic Racism on both sides, but also a major reason why some elves are more humble than one might expect given their inherent powers.

It is exceedingly common for Elves to come in multiple breeds, all better than you in some way or another. Usually they'll come in an archetypal trinity, these garden varieties being:

Some common varieties beyond those three include:

This subject is prone to Internet Backdraft on RPG forums. Many see elves as only enjoyed by munchkins or those who wish to see themselves as better than everyone else in every facet, yet others claim that elves are above such things. Which, really, only makes things worse-can you really claim to be above being above people?

Their lack of facial hair and spiritual inclinations point at one of two main sources of inspiration — Magical Native Americans, or Celtic history and mythology. Of course, results of mixing even these two vary wildly depending on the writer's skill. In particularly egregious cases elven society can become a Mary Sue Topia.

Compare The Fair Folk, Screw You, Elves! (when you don't believe in their betterness), Christmas Elves (for the other kind of elf), Our Fairies Are Different, Our Nymphs Are Prettier, Witch Species.

Whatever you do, don't mention the Dwarves.

In "Fantasy Races", Elves are impossibly smug (no matter the breed).

Alternative Title(s): Our Elves Are Different, As An Elf

In "Fantasy Races", Elves are impossibly smug (no matter the breed).