Pokemon completely defy Linnaean genetics. Their metamorphosis from one stage to the next frequently break the bounds of phyla.

Also, nope, it is more simple that that. Perhaps the only change in phylum (which I get you are using as in Taxonomic Term Confusion) is Remoraid to Octillery; which can be handwaved by it being an Octopodal larva (and, there are FAR WEIRDER THING IN REAL LIFE). 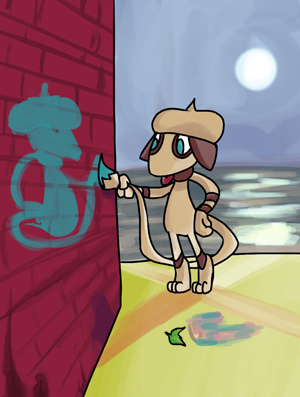 Smeargle is a bipedal canine pokemon. They have white fur with brown markings. Their heads are topped with a growth of fur resembling a beret. The fur on the ears, neck, ankles, wrists, and the area surrounding their eyes and eyelids are brown. Most interesting are the dexterous front paws of Smeargle, and their long tail ending in a paintbrush-like tuft.

Smeargle are famous for the pigmented fluid that continuously drips from the tips of their tails. When applied to surfaces, this fluid acts like a universal paint, and can be applied to most solids. Smeargle use this paint to both mark their territory and decorate their homes. The color of a Smeargle's "paint" is determined from conception, and will stay the same color throughout their life. Externally speaking, Smeargle are unremarkable, they are neither strong, nor agile, nor durable, but they are very intelligent and creative.

Most remarkable indeed are Smeargles' extremely developed omni-sacs, which are found in several places throughout its body. When encountered by an attacking pokemon, Smeargle will closely observe the move the pokemon uses, and then sketch a pattern on any nearby surface. Once committed to memory, the Smeargle can then use the move whenever it chooses, replicated perfectly. This is how the omni-sacs are used, with these organs, Smeargle can replicate a stream of fire, a psionic attack, it can even perform feats that require wings, like extended flight. Even more bizarre, Smeargle from the Ruins of Alph area, have been reported to disappear into darkness, likely a result of an encounter with Sinnoh Champion Cynthia's Giratina.

Due to their uniquely high capacity for adaptation, Smeargle are able to survive in most environments, assuming there is a sufficient supply of food and water. They have been observed to enjoy cave-like areas such as the Hoenn Region's Artisan Cave, as it provides them a large "canvas" for their markings. Smeargle habitats can be spotted easily by the paint markings left on their surroundings, these territorial markings appear to be unique to individual packs of Smeargle, and over 5,000 have been seen.

Fitting of their canine appearance, Smeargle are carnivorous in practice, not out of a nutrtional preference for meat, but because of their creative nature. In the wild, Smeargle often ignore plant material and fruits as a source of food, instead using them as pigments for a temporary batch of paint. As such, it has been noted that newborn and freshly-caught Smeargle have a tendency to play with the berries their trainers feed them, instead of eating them.

Smeargle are not hostile towards humans, but they will attack if provoked, or if they are protecting their pack or their offspring. In this situation, the number one hazard is the unpredictability of a Smeargle. Because of this, no attempt should be made to fight a Smeargle without a pokemon, one should simply run, Smeargle will not pursue you.

When a female is ready to mate, she wanders off to find a solitary place, and paints a specific set of markings on her surroundings. When a male finds this "nest" he attempts to court the female by painting a picture for her. If the female finds it suitable, she mates with the male. If not, she attacks the male, who leaves immediately, or else be killed.

After conception, the female returns to the pack, and performs her given duties. When the arrival of the litter approaches, she rests in a pre-made area in the pack's den until the litter is born. After her puppies are born, the female raises the young with the assistance of the pack, taking them with her while performing her duties to teach them their place in the pack structure.

Smeargle packs are female-dominated, with one Smeargle acting as pack leader, and the rest having defined functions in their society. Such positions include hunting, lookout, a child-rearing. Smeargle are generally very cooperative, performing duties as teams, including painting "murals" together. If a Smeargle attempts to turn on their pack, they will be either exiled or killed. If a Smeargle does not perform its given function satisfactorily, it will be moved to another position. When a Smeargle reaches adulthood, it will allow a member of its pack paint a paw-print on its back with its own paint.

TVTropes Nuzlocke Thread. - Arceus Help Us All.
lockonlockon Game Master from In a dream

Will draw Smeargle image for you.

Protists are paraphyletic, they do not exist as a unity. They are stem-plants and stem-animals (and fungii fall in the latter group).

As well as their lack of tissues. All Pokemon but a minority means they have complex tissues. Even the Cnidarians.

See, this is the area of biology where I get utterly confused.

I'll repeat my self, then could you repeat yourself in layman's term.

Pokemon are like protista in that they have traits belonging to many kingdoms. The big difference from protista is that they are complex organisms.

@Jane: Thank you! I was thinking of it being something like Smeargle painting a picture of a Smeargle.

Wait I thought Smeargle was a primate, or at least a lemur.

Sorry, I can't hear you from my FLYING METAL BOX!
lockonlockon Game Master from In a dream

Smeargle appears to be based on a beagle and a painter.

Smeargle's name may be a combination of smear and beagle.

Doble may be a combination of dog and doodle or dabble  to splatter liquid, which could be a reference to paint being splattered. Doble also means double in Spanish, perhaps referencing Smeargle's ability to copy opponent's techniques.

Huh. Maybe they're dog monkeys like Mankey/Primape are pig monkeys?

Sorry, I can't hear you from my FLYING METAL BOX!
lockonlockon Game Master from In a dream

But protists do not exist, the only thing an algae and a protozoan have in common is their lack of complexity, they are closer to plants and animals that to each other.

They are an artificial group. Just like Invertebrates (those have SOME logic behind them, as Annelids, Mollusks and Arthropods are closer to each other that to vertebrates; but, for example, Echinodermates are closer to Vertebrates that to any other invertebrate)

But in that way, pokemon are also similarly unrelated.

We have animate plants and fungi, seemingly non-organic things, live piles of sludge, and bidoof.

Bidoof is killer at chess.

What brought that up?

In fact, who came up with that?

Bidoof? Or the chess thing?

Please consider supporting my artwork on Patreon
Neo_Crimson Your army sucks. from behind your lines.

Sorry, I can't hear you from my FLYING METAL BOX!
CalamityJane from None of your business Relationship Status: Robosexual

Some guy linked to the comic in the Fifth Gen News Thread.

This a fun bit of surrealist humor.

That reminds me of that really really mind-screwy Pokemon comic that was posted here a while back. You know the one with the Zen Pikachu.

Sorry, I can't hear you from my FLYING METAL BOX!
CalamityJane from None of your business Relationship Status: Robosexual

No clue what you're going on about.

Please consider supporting my artwork on Patreon
CalamityJane from None of your business Relationship Status: Robosexual

Oh, and Lockon, As an artist, I would just like to point out that most of us are loners and prefer to do our artwork alone. We're perfectly fine with people watching us to learn new skills, or even do sequential stuff, but usually if we kept someone around we'd keep them as a student or an equal, teaching them how to do stuff and urging them on in different ways. Though if a smeargle came and added something into my artwork that it thought looked better, I'd smack it to kingdom come.

I guess I will change that.