This thread is locked
ccorb She/her from the Sol Dimension Relationship Status: Only knew I loved her when I let her go

I'm going to suggest a picture of several Sonic characters. This one contains a few canon foreigners and transformations, but maybe that's not a problem? 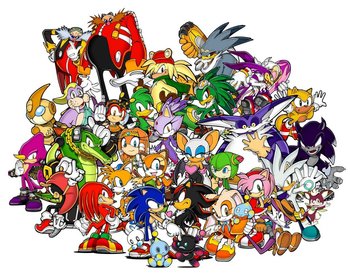 This isn't even all of them.note Also pictured: Canon Foreigners (Rotor the Walrus and Cosmo) and transformations (the Werehog)

This one contains characters who appear in games.

a sandbox for a possible cleanup thread
Willbyr

"My battery is low and it's getting dark."—Opportunity
Primis He / Him from Nsburg

Concept's good, but both suggestions are super blurry and not transparent.

Luckily, these both just seem to be PNGs stacked on top of each other, so it shouldn't be too hard to make a higher-quality, transparent versions. I'll try to make those later.

Register to Vote.
ccorb She/her from the Sol Dimension Relationship Status: Only knew I loved her when I let her go

Here's a picture of Mario characters. I'm sure we can set aside the Sonic characters for Characters.Sonic The Hedgehog. 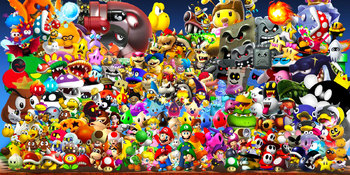 a sandbox for a possible cleanup thread
Synchronicity Miss Atomic Bomb Relationship Status: I've got a total eclipse of the heart

"A darkness approaches. A day will come in the future where everything you care about will change... Until then I'll be watching you!"
TheUnsquished Apparently unsquishable from Southern Limey Land Relationship Status: Is that a kind of food?

Lost: Marbles. Reward if found.
Jester_Punslinger I fight for a "Jest" cause from Somewhere back in time. Relationship Status: Non-Canon

The Rosers were red. The Drownies are blue. I know What the Thunder Said. Do you?
petersohn from Earth, Solar System Relationship Status: Hiding

"My battery is low and it's getting dark."—Opportunity
GeneralGigan817 God Salesman from the Bad Future Relationship Status: Non-Canon

Either OP could go on Characters.Sonic The Hedgehog.

ccorb She/her from the Sol Dimension Relationship Status: Only knew I loved her when I let her go

Does that mean you redacted your posts?

a sandbox for a possible cleanup thread
jandn2014 Hangs around Image Pickin a lot from Connecticut, United States

ccorb She/her from the Sol Dimension Relationship Status: Only knew I loved her when I let her go

a sandbox for a possible cleanup thread
Willbyr

6 is in and tagged for this page; caption?

I prefer 1.1 for Characters.Sonic The Hedgehog.

dRoy Ready to Rant from The Happy Place Relationship Status: A cockroach, nothing can kill it.

I, uh, hate to come in here and throw a wrench into things, but that Mario picture uses fan models (Baby DK, Baby Wario, Goomba King, Wart, Pauline I think, among others) and straight up has a character that hasn't appeared in canon (Baby Waluigi. Also not sure where that blue thing with the scar is from). The quality is also atrocious.

The Sonic pictures, to my knowledge, also use fanart for at least three characters (Rotor, Mighty, Nack).

Shit, let's be Disobedient
ccorb She/her from the Sol Dimension Relationship Status: Only knew I loved her when I let her go

And also Ray. Here's another picture of Mario characters. It also contains Donkey Kong Country characters, but maybe that's not an issue. Also, the quality needs some work. 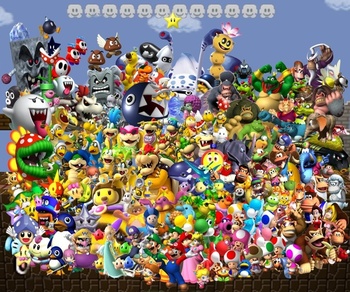 a sandbox for a possible cleanup thread
ccorb She/her from the Sol Dimension Relationship Status: Only knew I loved her when I let her go

And who commented out on the page that Sonic isn't an example?

I believe because of these parts of the description right here:

Please note that this is for extreme examples of regularly occurring characters. It's really not all that uncommon for a story to have ten or fifteen characters, especially with a Villain of the Week format.

Sonic has a shitload of characters, but in most cases the characters are one-offs while the main cast is usually Sonic, Tails, Knuckles, Amy, ect. The cast is wide but the focus is slim, basically.

Hell, that's kind of the same for Mario; the mainline games focus on Mario, Peach, and Bowser, maybe with Luigi and some Toads on occasion, but the spinoffs have much greater character variety even if those four show up every time.

Though honestly I wouldn't be surprised if Loads and Loads of Characters is misused as, well, a work having loads and loads of characters, even if the focus of the work is on a small subset of them.

for 22. I actually like it way more than 6, as the model variety really hammers home how vast and long-lasting the franchise is.

Shit, let's be Disobedient
Primis He / Him from Nsburg

Current and Classic Sonic don't fit that definition, but the "Adventure-era" of Sonic absolutely fits. It had countless recurring characters, and each game featured a different lineup of them. That was a major criticism of that era, to the point that it became a meme.