Is this too meta for an Awesome page? It's from Splatoon's.

I'm opposed to 'meta' moments on principle. They're pretty harmless in general (and they're at least on pages meant for gushing), but they're still shoehorns, IMO.

WarJay77 Big McThankies from McSpankies! from The Void Relationship Status: Armed with the Power of Love

They're also just not allowed as per da rules, so we can chop that one safely.

I agree with Discar on this.

Now, most of the rules you proposed are fine and/or already in place. The only one I'm worried about is the "strong reaction" one. The Moments were renamed from Crowning Moment specifically because no one cared about it any more. Yes, you can list every single funny moment in an entire series. That is allowed, and has been for years.

YMMV examples are subjective by definition. Some people might have strong reaction to something, others wouldn't care. It is not the reason to claim that the example is not valid, and determining whether the reaction is "strong enough" would a) add even more subjectivity on top of it b) violate the There Is No Such Thing as Notability principle. As written on that page:

Removing tropes, examples... anything... because of "notability" stifles the wiki. It can intimidate new writers who wanted to put in an example they liked and had it shot down.

Take my heart when you go.
WarJay77 Big McThankies from McSpankies! from The Void Relationship Status: Armed with the Power of Love

On the Nightmare Fuel thread, I like to make a point about how all examples should be considered by the standards of the work and the other examples. That is, if a work regularly features creepy monsters, the monsters on the NF page better be considerably scary, because otherwise one can assume the target audience wouldn't actually find it scary. On the flip side, just because we don't find something scary, doesn't mean it should be cut.

I think the same can be said for this thread, with a much broader margin of what's acceptable. See, whether or not something is scary for the target audience can be relatively objective, since, say, the same audience that'd watch gorefest horror movies wouldn't find things in Sesame Street scary, but a kid would. However, with things being awesome, funny, sad, and heartwarming, it's less important to worry about the audience and more about the general tone and standard of the work.

On the Nightmare Fuel thread, I like to make a point about how all examples should be considered by the standards of the work and the other examples.

But why should they? My understanding is that an example should fit the trope description, and that is all. What you propose is exactly determining notability — whether the example not only fits the trope but is also "notable" in the context of the work, "significant", "considerable" or what have you.

And that is what TV Tropes is not about. If a comedy has a long list of Funny moments and a horror movie — a long list of scary moments, fine. If tropes applicable to every minor character in a series with Loads and Loads of Characters are listed, fine. This is not The Other Wiki.

Take my heart when you go.
WarJay77 Big McThankies from McSpankies! from The Void Relationship Status: Armed with the Power of Love

Because even audience reactions have objective criteria, and Nightmare Fuel pages tend to be littered in shoehorns. Reading them, so many examples blatantly exaggerate the moment to make it seem more scary, but that doesn't make them scary. Nightmare Fuel pages are about things that could give its audience nightmares, not just things that make you say "well that's slightly offputting". I mean, some examples are things so blatantly harmless it makes you wonder if they weren't added just to make the work seem cooler and edgier. It isn't Nightmare Fuel if nobody was ever scared if it.

Furthermore, you're getting the notability rule wrong: that just means any non-pornographic work is worthy of a trope page, not that every audience reaction needs to be there.

Anyway, I do agree that in this case we shouldn't just go chopping examples we don't find good enough. This debate mostly concerns the Nightmare Fuel pages, so you may want to take this issue there if you want to continue debating it.

Wick Check Project Official Sandbox (TM) / Now with a vandalism page!
Brainulator9 Short-Term Projects herald from US Relationship Status: I get a feeling so complicated...

I mean, I thought that if There Is No Such Thing as Notability applied to tropes, then we might as well permit personal anecdotes, meaningless content, fancruft, and complaining. After all, we cut Counterpart Comparison for fancruft regardless of notability.

Awesome.Super Smash Bros Ultimate has an entire "Meta" folder. Is there anything salvageable in there? I think professional gaming moments are acceptable, but there's an awful lot of "The fact that..." examples.

Every day when you're browsing TV Tropes, among every ZCE is a shoehorned Moments page. 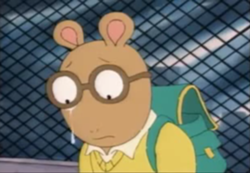 You wouldn't be happy if you were lost too, would you? This image quality makes me sad.
"He's a sad sad bunny, a sad sad bunny, TV isn't funny when you're a sad sad bunny."
—Art Garfunkel, "The Ballad of Buster Baxter" This is a funny moment! Buster calls out Art for the song not being sad.

Arthur and the Real Mr. Ratburn

Locked in the Library

Arthur and the True Francine

Sick as a Dog

The Scare Your Pants Off Club

What about the wide shot of Arthur standing on the sidewalk alone after Buster drives away as sad music plays? That was the part that got me.

That's How the Cookie Crumbles The episode's name doesn't have a "That's," by the way.

The Ballad of Buster Baxter

The Chips are Down

Revenge of the Chip

Mom and Dad Have a Great Big Fight

Prunella Gets It Twice

Is There a Doctor in the House?

Thanks a Lot, Binky

So Funny I Forgot to Laugh

The Case of the Girl with the Long Face

Phew, that was a lot!
Unicorndance Logic Girl from Thames, N.Z. Relationship Status: Above such petty unnecessities

With the Arthur thing, I'm a bit annoyed by saying things like "cut" and "seriously?" without explaining why. I personally found some of them actually sad.

For every low there is a high.
Unicorndance Logic Girl from Thames, N.Z. Relationship Status: Above such petty unnecessities

Though I do agree that the "ears turning green" and "next time you get married" examples should be cut. Too silly.

For every low there is a high.
WarJay77 Big McThankies from McSpankies! from The Void Relationship Status: Armed with the Power of Love

Well, which examples do you disagree on?

The "Vomitrocious" example, but then again, I've always been a sucker for Sick Episode's.

For every low there is a high.
Grotadmorv

I didn't find Vomitrocious very sad. Looking back, I think Prunella Gets it Twice could get a pass, but I'm still going to remove a lot of the non-sad moments. The page as-is is just ridiculous.

I just removed 188 spoiler tags from the Horus Heresy Awesome page. It is a series of over 50 books after all.

You didn't do it manually, did you? Because Itty Bitty Wiki Tools has a tool for it.

Manually. That would have been helpful at the time.

There's still a lot of misuse left on that page, but the rest would need to go through here.

If my post doesn't mention a giant flying sperm whale with oversized teeth and lionfish fins for flippers, it's just not worth reading.
Stage7-4

On the Luigi's Mansion 3 page, capturing Morty is listed as a tearjerker which seems like trope misuse to me (it's more Video Game Cruelty Potential in my opinion). Sure it's kinda sad, but is the bar for tearjerker really that low?

For context he's an optional boss that doesn't resist and gives no reward other than an achievement. Luigi seems a little bummed after catching him, but in a "dropped my ice cream on the floor" way.

ShinyCottonCandy Yo-yoshi! LEGO-shi! from LEGO Yoshi's Island Relationship Status: Who needs love when you have waffles?

As it stands, nothing on that page seems to refer to any actual funny moment anyway, so I vote for a cut unless someone familiar with the work can salvage it.

It is also unindexed and the only editor is the author of the fic themselves, which I believe is against the against the rules as funny are YMMV.

Knowledge is Power, Guard it Well
Brainulator9 Short-Term Projects herald from US Relationship Status: I get a feeling so complicated...

Given all of that, insta-nuke.

Looking further, the same is true of the fic's Fridge, Heartwarming, Nightmare Fuel and YMMV pages.

Knowledge is Power, Guard it Well
Back Top
Total posts: 469